For Syrians fleeing their homeland, there is never a right time to leave. Zaina,* 24, endured more than a year of fighting in her hometown of Homs before 10 neighbors were killed in a single helicopter attack last month. Nine months pregnant at the time, she decided she had had enough.

"I felt I am going to give birth and that I have to leave this place," she said.

Zaina, her sister and sister-in-law left Homs but did not get far. Before reaching the border, she gave birth to a little girl with blue eyes and porcelain features in a canvas tent, attended by another Syrian fleeing the conflict.

"It is hard to describe giving birth with no mother, husband or family to take care of me," Zaina told UNHCR visitors from an unfinished house where she has sought refuge in neighboring Lebanon, wiping away tears. The child, Rama, now three months old, dozes fitfully at her side. 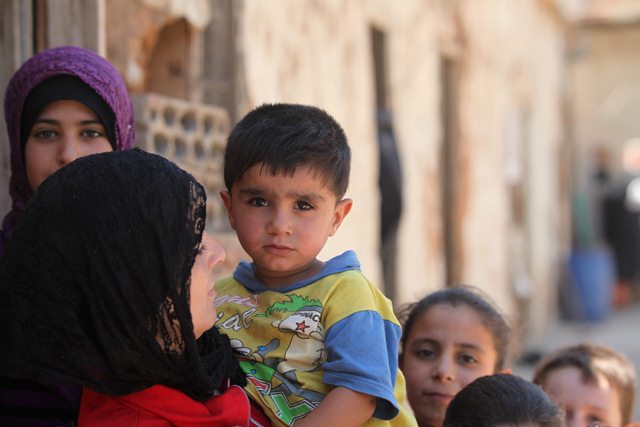 Displaced Syrian families live in a collective shelter in the city of Arsal, Lebanon.

For Syrians fleeing violence in their homeland, the journey brings a host of perils. Those arriving in neighboring Lebanon describe being shot at, turned back, harassed at checkpoints or forced to trek hours through the night across rocky mountain passes with small children.

An overwhelming number of those fleeing Syria are women and children, including many who are ill or pregnant. Their men are either lost, fighting or staying in their home areas to protect their neighborhoods.

UNHCR, together with implementing partners on the ground, is providing assistance to Syrian refugees arriving in Lebanon. This support includes material assistance, such as food and cooking supplies, as well as help with shelter, schooling and medical care. Nearly 350,000 refugees have fled the crisis in Syria, more than 60,000 of them to Lebanon.

Sahar,* 25, fled Qusair as the town came under shellfire. "We felt maybe it's our turn to die," she said. "But we didn't want to die. We wanted to leave."

Sahar, her sister and sister-in-law took their six children with them; the oldest was five. The little group set off along a narrow path towards the border, shells bursting around them. The small children cried, but only the five-year-old "understood what the gunfire meant," recalls his mother. He sat down in the road and cried "God is Great."

"I pray to God that you will never see what I saw," says Sahar.

A woman from Homs who had just arrived a day earlier described the trip as "really dangerous." She came with a large group that included nine small children.

"When you are travelling by yourself and you have children, the situation is different because children will not bear to stay with no water and no food and they are not patient enough to travel long distances. In the end, I am a woman, I am not a man, and I am not strong enough to carry the children," she said. "I am very tired."

Mohammed, 35,* a farmer, left his village near the border when worsening violence last month took the lives of nine neighbors in a single attack. Through the night for 14 hours, his family hiked with their neighbors, including 10 children, one as young as three. One boy, Nabeel, 9,* had to be carried most of the way because he was born with a defective heart valve.

Mohammed tried to hush the other children from crying out, so as not to alert border patrols. At one point they were fired on, but they could not tell from which direction, and all had to lay still on the ground.

Now safe in Lebanon, the children run for cover inside their tent when they hear the roar of planes overhead.

By Andrew Purvis in Ersal, Lebanon