JUBA, South Sudan, August 3 (UNHCR) – The UN Refugee Agency has raised the alarm over health conditions among refugees in two South Sudan camps, but stressed that mortality and morbidity rates have stabilized and even dropped with urgent interventions. 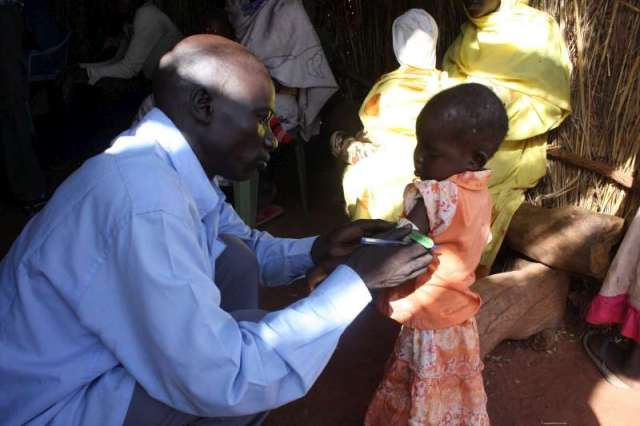 A new arrival in South Sudan's Yida camp gets her arm measured as part of malnutrition screening. © UNHCR/V.Tan

The two camps in question are Yida in Unity state and Batil in Upper Nile state, which have been struggling with high rates of malnutrition, disease and death amid a massive influx in recent months and a rainy season that has made aid delivery more difficult.

She added, "In the last three weeks, mortality and morbidity rates have stabilized and even decreased, as aid agencies took urgent action to address the root causes. In addition to providing emergency treatment, the aid agencies are also working to mitigate the risk of water-born and hygiene-related diseases."

Most of the interventions are preventative. UNHCR is working to double the supply of potable water in Yida by digging six additional boreholes. It is improving drainage systems at all seven water points to reduce the risk of contamination and water-born diseases from standing water. Community latrines are being built to meet the needs of the growing population. NGO Solidarites has started a 40-day campaign to ensure clean buckets and chlorination at water points. Soap has been distributed and hygiene promotion sessions are ongoing.

UNHCR has begun a distribution of additional supplies to more than 8,200 families with children under the age of five. Identified as the most vulnerable in the camp, they will receive soap bars, jerry cans and blankets to improve sanitization and minimize the risk of respiratory infections. The distribution of other supplies such as plastic sheeting and buckets will continue throughout the month.

However, many of the new arrivals in Yida are still sleeping under poorly-thatched roofs, which increase the risk of respiratory illnesses and malaria, especially among children under five. UNHCR is planning to airlift an additional 8,500 plastic sheets and 15,000 mosquito nets for immediate distribution.

These are the challenges for Yida, a remote camp close to the border with Sudan. Its refugee population has quadrupled since April to some 60,000 people today, more than one-quarter of them children.

"Most refugees have been arriving in a very weak state – exhausted, dehydrated and malnourished," said Fleming. "The rainy season has exacerbated the situation, bringing seasonal diseases to an already fragile population. The rains have also flooded nearby roads and turned Yida into a virtual island. Airlifts are now the only way to get life-saving aid into the camp."

In Upper Nile state, Batil camp is facing similar problems. An estimated one in three children is malnourished. Common health problems in this camp of 35,000 refugees include watery diarrhea, respiratory tract infections and increasingly, malaria.

Last Sunday, aid agencies started a blanket food distribution across the camp, followed by a therapeutic supplementary feeding program to help children recover from moderate acute malnutrition. An additional 12% of children under five are receiving treatment for severe acute malnutrition.

In total, Batil has five clinics for health and nutrition treatments, and 20 oral rehydration points throughout the camp. The health agencies have set up surveillance and response mechanisms for possible outbreaks of diarrheal and other diseases.

In the last year, some 170,000 people have fled conflict and food shortages in Sudan's South Kordofan and Blue Nile states and found refuge in South Sudan.

To date, UNHCR has only received $47.5 million out of the $186 million it needs to meet the urgent needs of the Sudanese refugees in South Sudan. In a welcome development this week, the Common Humanitarian Fund allocated $10 million to the refugee emergency in South Sudan, mostly to NGOs working in the areas of health, nutrition, water, sanitation, road access and site preparation.