Celebrate the strength of refugee fathers

Refugee fathers provide strength and stability for their children during the most dangerous and trying times in their lives. They protect their young ones as they flee violence and persecution and build new lives when they have been forced to leave everything behind. This Father’s Day, read the stories of six fathers who are determined to protect their families at all costs.

"The walk from Cúcuta to Medellín took us about 18 days." Johan.

“We walked with other families from Venezuela. Some we knew, some we didn’t,” Johan shared. “The walk was long and difficult and finding shelter each day was hard. When we found shelter it was only for the kids and my wife. I had to sleep outside.” 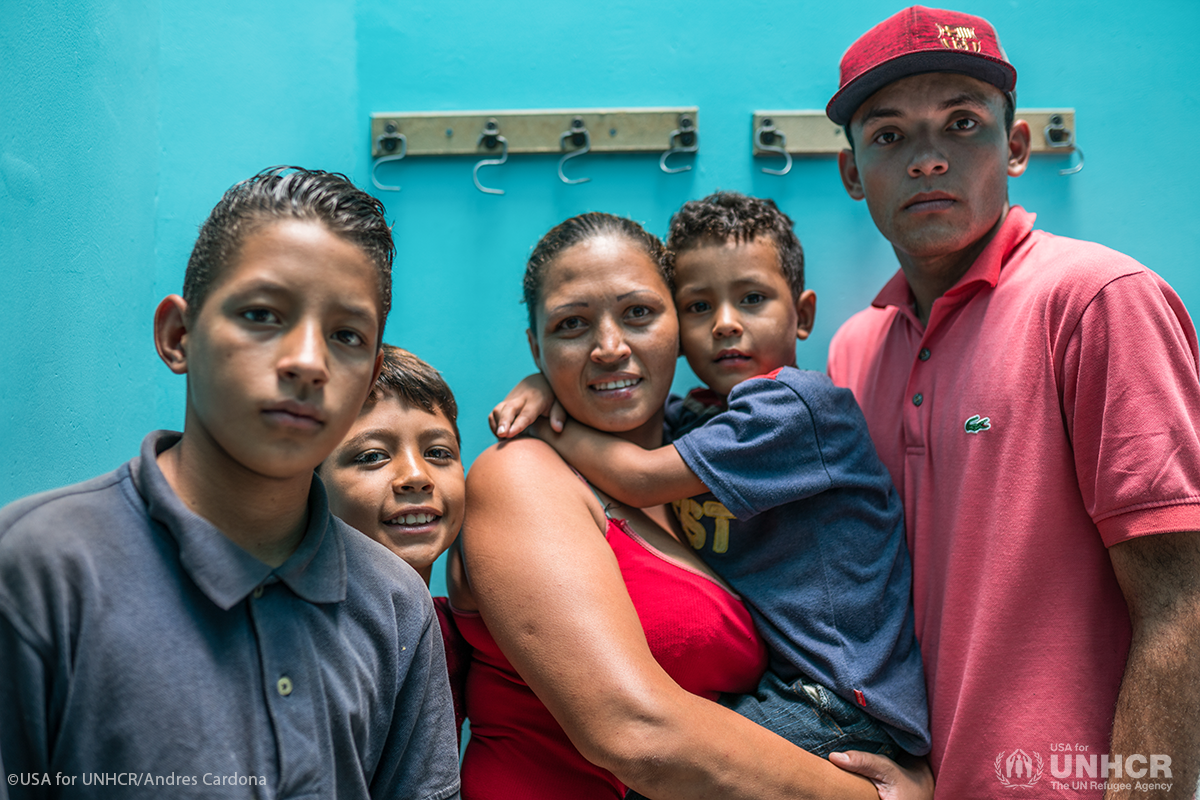 “I only care about raising my kids and making sure they don’t lack anything,” says Mohammed.

Mohammed and his wife, Awash, have six children. Their 4-month-old triplets, Hasan, Sajed and Sajeda, were born in a refugee camp. Two of their other children, Ghosoon and Saqer, have cerebral palsy and cannot walk or talk. Despite the difficulty of traveling with two children with special needs, Mohammed made the lifesaving decision for his family to flee their home in northeastern Syria when conflict left them unable to fulfil basic needs. Now safe in Jordan, the family receives cash assistance from UNHCR and has begun rebuilding their lives. 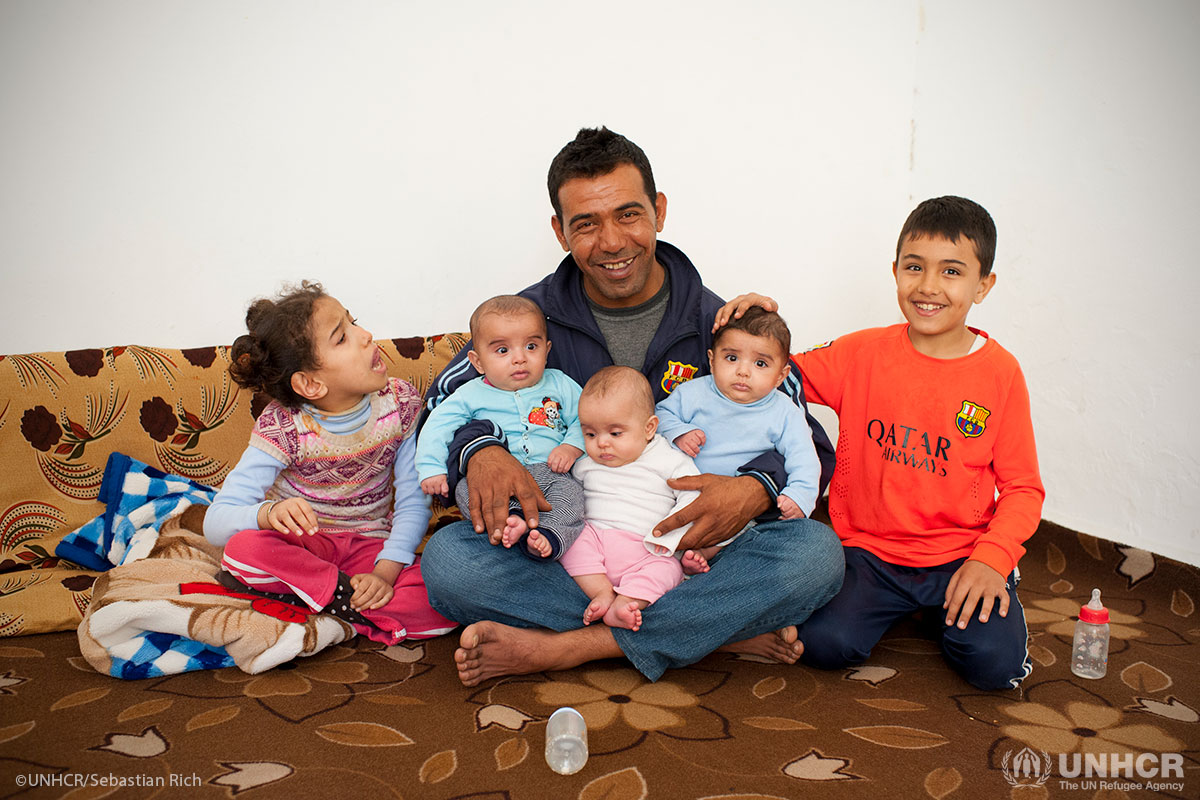 For stateless fathers like Armando, rights and freedoms are at the core of their hopes and dreams for their children. Armando is the community leader of the Awá settlement in southwest Colombia and is fighting to improve their rights. He wants to teach his son, Jeiko, about their family’s history of resilience despite the constant displacement they have faced.

“We are afraid that our culture will be washed away living here, we have to teach the new generations our traditions,” says Armando. 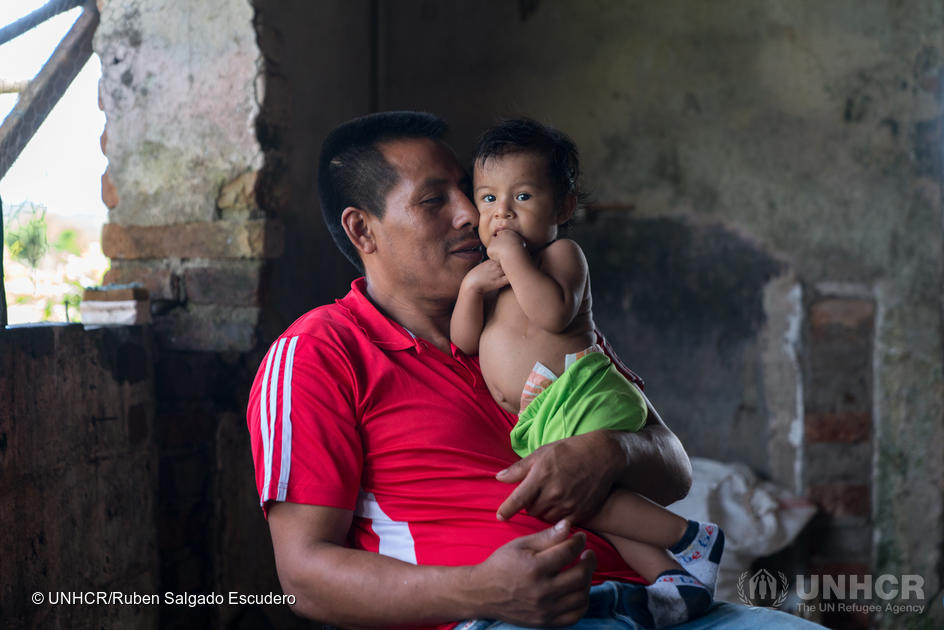 Saleh is a widower and father of six. His wife died while giving birth to their triplets on New Year’s Day. As a single father, Saleh is his children’s only source of love and protection. He must be their provider and caretaker at the same time. Saleh puts on a strong face for his children, but inside he grieves the loss of his wife. He makes her a promise, “I will never leave the side of the children even if I die.” 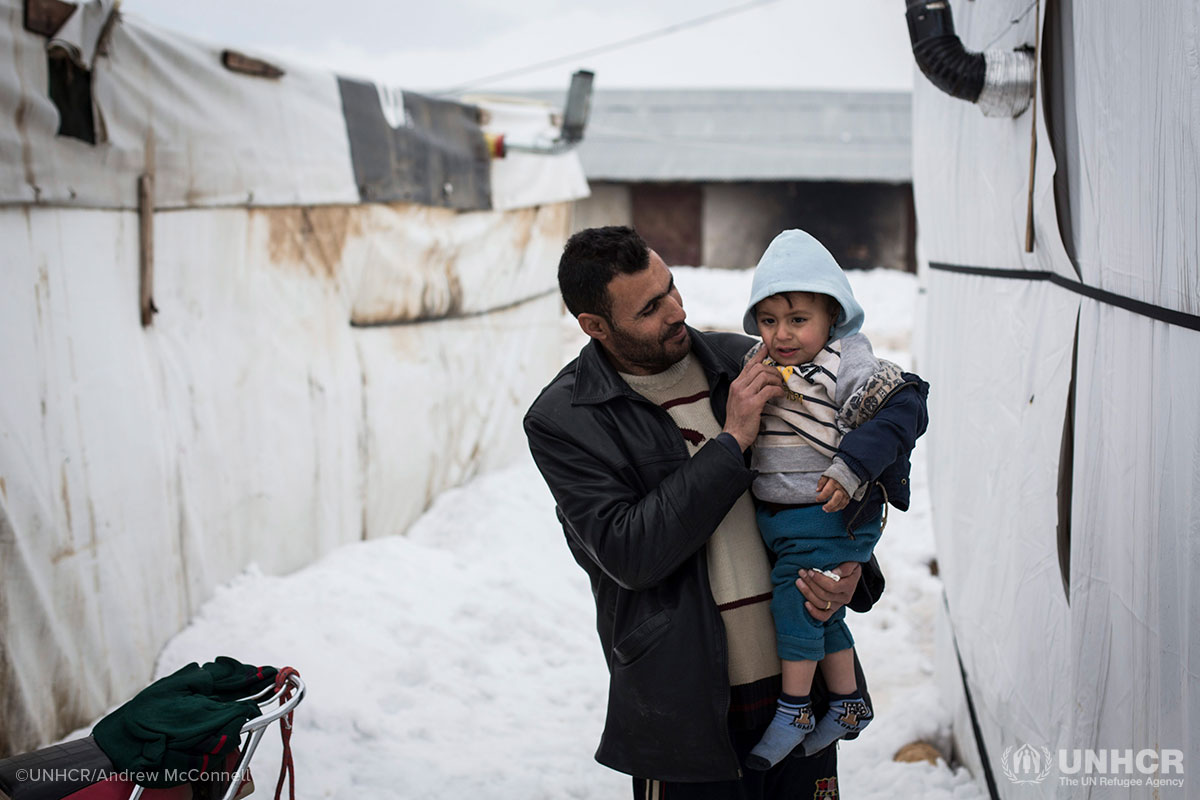 Hayel, Wisal and their three children Ahmad, age 6, Shaymaa, age 3, and Maisaa, age 2, live in an informal refugee settlement in Bekaa Valley, Lebanon. Thanks to USA for UNHCR donor support, they have received mattresses and blankets to make a comfortable home. But Hayel is always looking for ways to make their shelter stronger and safer for their children. “What I care about the most is to keep my family under one roof where the kids can be warm, where they can eat, where they can study, and be safe,” he says. 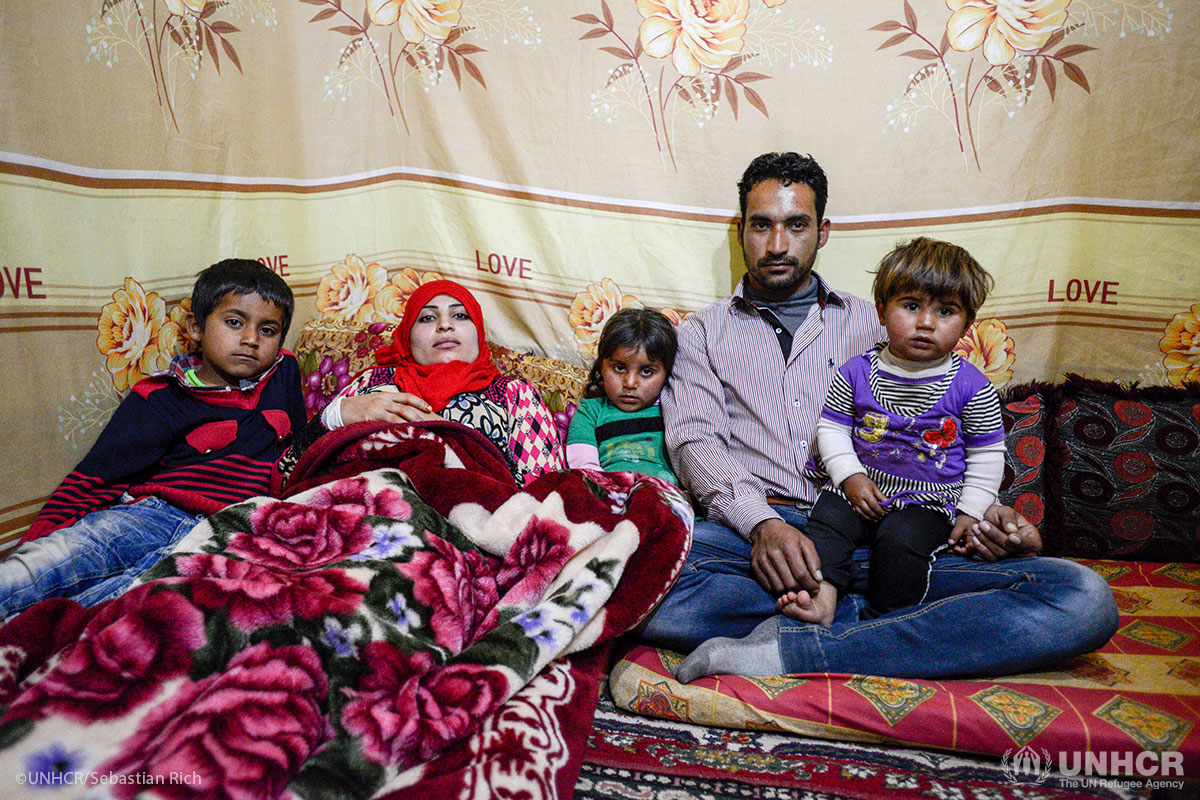 Thirty-year-old Minadar, a former refugee from Afghanistan, has eight children. Minadar returned to Afghanistan with his wife and children after Pakistan became an unsafe place to take refuge. He always dreamed of raising his children in his home country but never thought it would be possible. Now that he has returned home, Minadar works tirelessly to build a strong foundation for his family. He goes to the market in Jalabad every day to see what work is available so that he can provide for his wife and children. 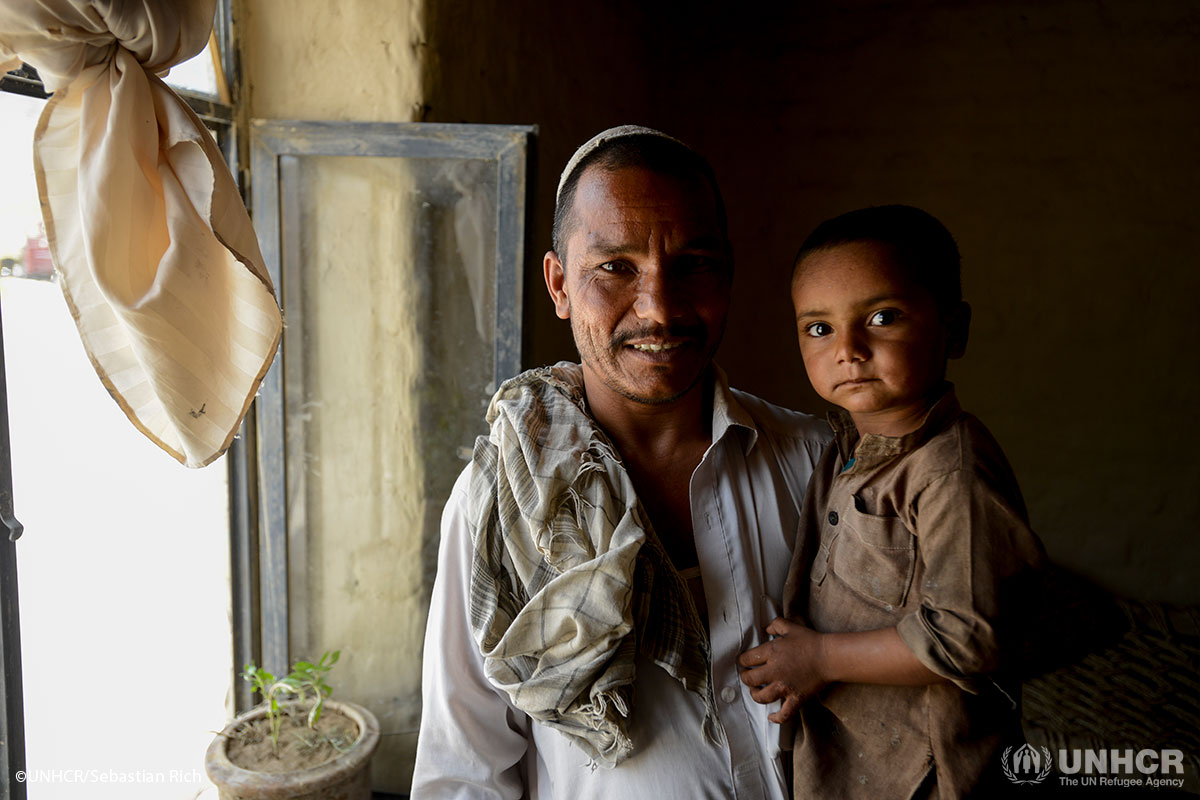 This Father’s Day we are celebrating the strength and resilience of refugee fathers. Their stories serve as inspiration to fathers all over the world.

You can help support refugee fathers in their efforts to protect their families by donating monthly to USA for UNHCR. USA for UNHCR is committed to providing care and empowering refugees everywhere in order to help them become independent in their new lives.