First Christmas in exile for Ukrainian refugees in Poland 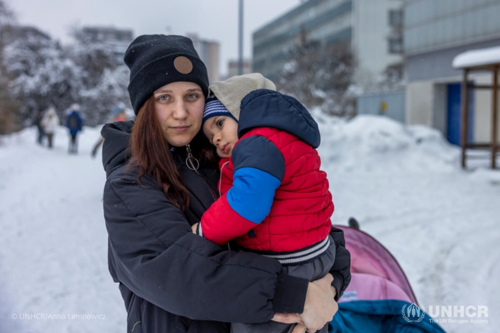 There is a tiny Christmas tree on the windowsill above Kateryna’s bed. A modest substitute for the one she, her husband and their three children would have had at home in Ukraine.

“War, no war, children must have Christmas,” says Kateryna, who, like most Ukrainians, will celebrate Orthodox Christmas this weekend, on January 7. She has made sure there are some presents under the tree for the children.

Kateryna is sitting on a cot in a large hall she shares with several dozen other refugees. Two-year-old Arsen sits on her lap crying to get her attention. Valentin, 11, is lying on another cot reading a book and Arina, 7, is playing with other children in the hallway. Her husband, Mykhailo, is at work.

“War or not war, children must have Christmas.”

The building they live in used to be an office but has been turned into a shelter for refugees by the Municipal Social Welfare Center in Krakow. It provides residents with basic facilities: 410 beds, bedding, clothing, food and hot water. It is clean and warm, but there is no room for the peace and privacy that people who have fled war so badly need.

When the war broke out on February 24, Kateryna decided to wait it out. Even more than the war, she was afraid of bringing her three children to a country she knew nothing about. “At that time, I thought that I was tough, and I could handle it,” she said. “But when I heard the whistling noise of incoming missiles above me, I realized how wrong I was.”

It was early March in the central Ukrainian city of Kryvyi Rih. Kateryna was on a walk with the children when they saw the explosions.

“We left – me, my husband and all three of our children – on the same day. We took only one suitcase with us.” 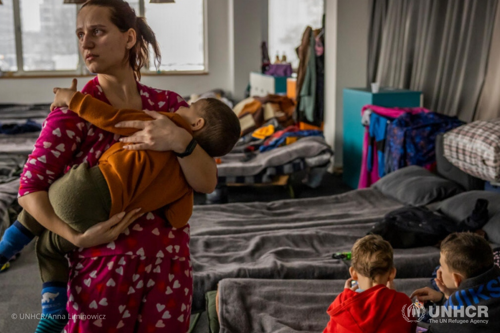 By law, men of conscription age are not allowed to leave Ukraine, but there are exceptions for those like Mykhailo who are fathers of three or more children.

A report published in December by UNHCR and REACH found that most of the 1.5 million Ukrainian refugees who have registered in Poland arrived more than six months ago, in March and April, although arrivals continue. The majority are from heavily war-affected areas in the south and east of Ukraine.

Many lack money to afford basic things with 69 percent of those surveyed citing cash as the most urgent need, and 40 percent citing food. Since Mykhailo found a job in construction, the family has other priorities.

“We can afford food and clothes, so we don’t even use humanitarian aid, because we believe that it will be more useful to others,” says Kateryna. The family’s priority now is to leave the accommodation center, but it has proven difficult to find an apartment to rent on one small salary.

Unlike Kateryna’s family, Valentina, 83, could not survive without humanitarian aid. She arrived in Poland on March 29 after fleeing Kramatorsk, a city in the Donetsk region, which was heavily shelled from the first days of the war. She escaped with her 48-year-old daughter Oksana and 12-year-old granddaughter Zhanna. “A few days after we left, a rocket fell at the Kramatorsk train station, killing 60 people,” said Valentina. “I was very afraid that my loved ones might be among the victims.” 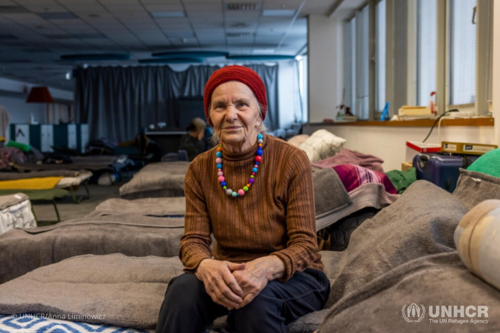 Valentina's family was among the nearly 300,000 refugees in Poland who received cash assistance from UNHCR, the UN Refugee Agency, in the first phase of the crisis when many refugees did not yet have access to state support. Later on, she could also count on financial support from the Polish government. Due to her age, Valentina cannot work, nor can she look after her granddaughter, so this responsibility falls to Oksana. If not for the shelter and the help available there, life for the whole family would be unbearable.

“I am very grateful for what I get from Poles, humanitarian organizations and volunteers,” says Valentina. “I have everything I need. I’m warm, I have somewhere to sleep, something to eat. Everyone around is nice and helpful.”

Valentina’s first Christmas in exile is filled with hope and anxiety. Hope – because she believes that one day Kramatorsk will be peaceful again and she will return home. And anxiety – because she worries about her loved ones. “I pray that my grandson, who stayed there, survives,” says Valentina.

Poland has been one of the main destinations for refugees from Ukraine since the start of the war and is bracing for the possibility of more arrivals this winter. “The response by the Polish authorities at all levels, as well as civil society, has been remarkable,” says Kevin Allen, UNHCR Representative in Poland. “UNHCR, together with other humanitarian organizations, is supporting this work, focusing on the most vulnerable refugees.”

With most refugees in Poland are not considering returning to Ukraine in the near future, the new year brings much uncertainty. While many hope to find work and improve their living conditions, others, such as Valentina, will continue to need protection and humanitarian aid.