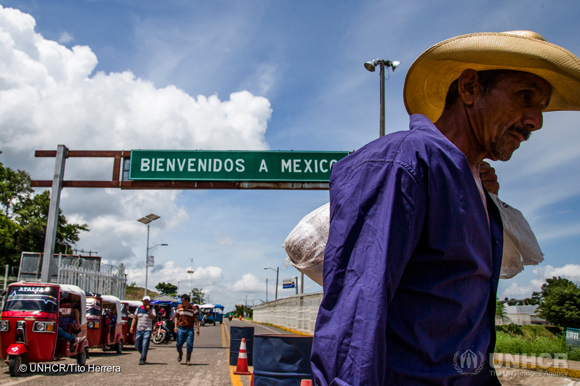 Guatemala is a gateway for refugees fleeing gang violence in Central America and heading north to the United States.

EL CEIBO, Guatemala – Bordertown resident Andrés makes only a modest living from his small grocery store and odd jobs as a mechanic and electrician.

But that does not stop him doing what he can to help the stream of families fleeing murderous street gangs in Guatemala, Honduras and El Salvador who trek through the town of El Ceibo as they head north in search of safety in Mexico and the United States.

For eight years he and his wife Francisca have made a room available in their family’s small, tin-roofed home to shelter men, women and children in need.

“It’s for them to feel a bit safer. Some of them are chased away from their countries by organized crime, street gangs,” says Andrés, who senses the fear they carry with them as they pitch up in this sultry town in the jungle lowlands of Guatemala’s Petén Department bound for Tabasco State in Mexico

“You can see it in their faces. You can see their desperation because they have to continue their search for safety,” he adds.

In 2015, the last year for which complete figures are available, nearly 110,000 people fled the so-called Northern Triangle countries of Central America - El Salvador, Guatemala and Honduras - and sought asylum abroad, most in the United States and Mexico.

Each month, a few thousand of them pass through El Ceibo, often clutching just a change of clothes and a few cherished belongings in a shoulder bag or backpack. They slip over the border and into Mexico on jungle trails, or cross informally on boats plying the San Pedro River.

“When people arrive at the border they don’t know anything about what is waiting for on the other side,” says Marion, a Salvadoran who was among the 50 or so refugees and migrants helped by Andrés and Francisca last month.

Their “help is a blessing when one is in the most difficult situation. With all my heart I thank all that they have given me,” she adds.

The powerful street gangs or maras operate throughout the Northern Triangle, where their crimes include extortion, drug dealing and murder. Many of those making the journey in search of safety report being robbed and assaulted. Women are also particularly vulnerable to rape and sexual assault.

For Andrés, the humanitarian work is not without risks. On different occasions, local criminal groups have approached him and his family, demanding that they stop helping those in transit, and instead work for them as informants. Despite threats, he refuses.

Andrés, who does not accept any money for the food and shelter that he provides, is a volunteer with Catholic Church group Pastoral Social, a local partner of UNHCR, the UN Refugee Agency.

To better protect the refugees in transit, UNHCR is supporting the construction of a shelter with capacity for 16 people in El Ceibo, which will be supported by Pastoral Social and managed by the three volunteers, including Andrés, who vows to remain engaged.

“I work with all my heart because I see their suffering. I am fighting for these people,” he says.