Help the UN Refugee Agency save lives in South Sudan!

Bombed out of their villages. Attacked by planes as they flee. It’s a living hell for the displaced people of Sudan.

Around 350,000 people have been forced to abandon their homes. And on top of this, there is little food.

One human tragedy among thousands: Joshua Luka lost his daughter and his wife on their way to South Sudan.

Violence in areas bordering South Sudan, including recent fighting in Southern Kordofan and Blue Nile states, has driven some 80,000 Sudanese refugees across the border into Unity and Upper Nile states in South Sudan, as well as more than 30,000 into neighboring Ethiopia. Hundreds of thousands more are displaced within Sudan.

UNHCR is actively engaged in the region providing shelter, vital services to keep refugees healthy, and ensuring they have a place of safety, but we need help from donors around to world to contribute $145 million to fund emergency aid operations for tens of thousands of civilians fleeing fighting in Sudan for Ethiopia and South Sudan. 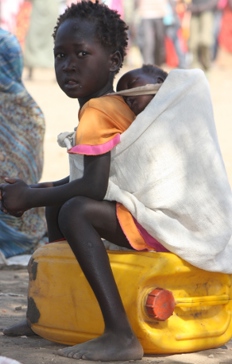 Donate to the UN Refugee Agency today  to help save the lives of Sudanese refugees fleeing conflict at home!