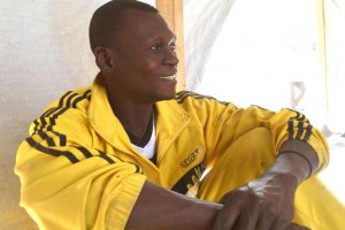 Moussa got married this morning. "I'm on my honeymoon today," says the Nigerian national, who only met his wife Zara a few weeks ago in a refugee camp in western Chad.

"We had a small ceremony this morning but the big party with music and dancing will be this evening," adds the 28-year-old bridegroom. "We don't have many of the traditional wedding foods and clothes . . . it's a real celebration from the heart." A religious leader presided, though the marriage has not been officially registered by the Nigerian or Chadian authorities.

But the community recognizes them as married and they bring a bit of light, inspiration and hope to the recently opened Dar es Salam site, which provides shelter to more than 3,600 of the 18,000 Nigerian refugees in Chad. Many, like Moussa, fled across Lake Chad by canoe when militants attacked the north-east Nigeria town of Baga in early January.

"As soon as I heard gunfire, I ran towards the lake," says Moussa, referring to the day of the attack. "Militants threatened my family and killed my aunt last November because she wouldn't give them the money they demanded," he adds.

He spent two days making his way across the lake by canoe to Ngouboua village. "You could see dead bodies everywhere. One woman was wading through waist-deep water with a baby tied to her back. When she realized the infant was dead she threw the baby into the water and continued to flee," Moussa recalls, clearly moved by the memory. "She didn't even have time to cry."

An estimated 5,000 Nigerian refugees are staying with relatives or other host families in Ngouboua, but it is close to the border with Nigeria and vulnerable to attack. Militants arrived by canoe on February 13 and attacked the village, killing at least seven people in their first raid inside Chad.

Concerned about security at the border, the Chad government allocated land to construct the Dar es Salam site some 75 kilometres inside Chad. UNHCR and its partners have been facilitating the relocation of refugees from Ngouboua and other areas of the lake region to Dar es Salam. The refugee agency has also been supporting the government by funding the distribution of shelter, food items, blankets, plastic, kitchen utensils and other aid. UNHCR also assists refugees with access to drinking water, sanitation (latrines and showers), and health care.

In Ngouboua, Moussa spent a lot of time thinking about how he could get back to his home town of Maiduguri, the capital of north-eastern Nigeria's Borno state. He had been visiting relatives in Baga at the time of the attack.

The last thing on his mind was finding a bride. But after meeting 19-year-old Zara in Ngouboua when she was collecting water for her family, he began spending a lot of time with the young woman. "I would help her to pump water and to carry it back to her house," recalls Moussa. "I liked Zara's serious demeanour and our open and honest discussions."

Their friendship very soon turned to love, and Moussa popped the question in Ngouboua after just two weeks of meeting Zara. "When discussing marriage, the only question Zara asked me was, 'Do you smoke?'" he says with a smile, adding that he was able to assure her that he neither smoked nor drank.

Moussa, taking the government advice to move further into Chad for safety reasons, moved to the Dar es Salam site in late January with UNHCR help. The number of people deciding to move rose after the February 13 attack, with some seeking help with transport and others moving on their own.

"The greatest gift is the peace and safety we have found in Dar es Salam," says Moussa. "For my honeymoon, I am looking forward to moving into our own family shelter today, he adds.