Tanitoluwa Adewumi and his family fled their native Nigeria in 2017, after jihadist group Boko Haram ordered his father, Kayode, to produce posters for their network at his print shop. Kayode refused and knew the family would be in danger if they stayed. 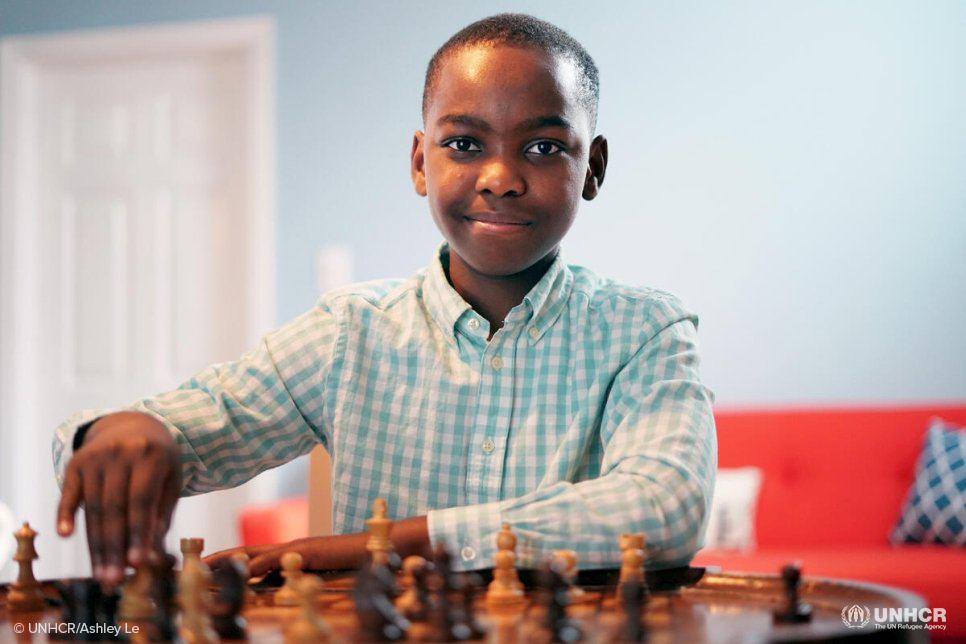 The family flew to Dallas, Texas on a tourist visa they had previously secured. Shortly after, they moved to New York City, where a local pastor connected them with a homeless shelter. It was there that Tani, now 10-years-old, saw a chessboard for the first time.

“I thought, ‘why not go for it,’” Tani said. “I liked the way the pieces moved, and how anything can happen at any moment.”

Today, Tani is one of the chess world’s fastest rising stars. His success has helped his family do things they could only have dreamed of when they first arrived in the US. They have met famous chess players and Tani has been recognized by world leaders. In his living room hangs a large portrait of the family with Bill Clinton. The family co-wrote a book with author Chris Borlase, My Name Is Tani, and I Believe in Miracles, published this past spring. Comedian Trevor Noah and Paramount Pictures bought the movie rights and a script by Steven Conrad is in the works. Tani and his family, who are seeking asylum in the US, no longer live in the homeless shelter and have moved into a home in Long Island, New York.

“I liked the way the pieces moved, and how anything can happen.”

After he learned chess at the shelter, Tani was playing at school when a teacher and part-time chess coach noticed his passion for the game and sent a note to Tani’s mother informing her the school had a chess club. Tani’s mother, Oluwatoyin, thought the club would provide a wonderful opportunity for her son to grow. However, the fee of $360 was too high for the family.

“I had to let them know that we had just come to the country. We didn’t have that amount of money,” Oluwatoyin said.

At the request of the chess coach, the school waived the fee.

Tani’s success in chess did not come immediately. At one of his first tournaments, he didn’t win a single trophy.

“When we were coming back, he looked at me and said, ‘Mom, I prayed that I would get a trophy, why is it that God did not answer my prayers,’” Oluwatoyin said.

In the subsequent months, Tani began attending trainings every Thursday after school. At the next chess tournament, he won a few points, a small but encouraging improvement. At the following, he won first place. Within six months, the teachers at his elementary school were starting to take notice.

Today, Tani’s bedroom is decorated in glittering trophies. His favorite is the large, tiered trophy from the 2019 K-3 (kindergarten to third grade) New York State chess championship, which he won at the age of eight, less than a year after starting to play chess.

Tani attributes his success to his self-described “aggressive” playing style.

“I’m very competitive,” Tani said. “When there is something on the line, I am 100 percent”.

On May 1, 2021, at the age of 10 years, 7 months, and 28 days, Tani became the 28th youngest person to achieve the status of national master. The current top-ranked American player and second-ranked player in the world, Fabiano Caruana became a master at 10 years 11 months, and 29 days.

“We believe [Tani] is one of the fastest to reach the rank of master ever,” said Daniel Lucas, a spokesperson for US Chess, the official International Chess Federation (FIDE) member of the United States. “Most who become master start playing at the age of five or six, so this just speaks to his prodigy level and natural skill he has.”

Before every game, Tani takes 20 deep breaths and calms himself so he can be laser focused on the game ahead. Tani has played a broad spectrum of chess players, from old to young to unrated to international grand masters.

“Hard work beats talent,” Tani said. “Don’t judge a book by its cover. If you see an unrated person, that should worry you because there’s no way to know if they are good or bad. So play your best.”

As a master, Tani is in the top one percent of chess players. As a grandmaster he would be in the top tenth of a percent. He hopes to become the youngest grandmaster ever – a title held by Abhimanyu Mishra, who reached that level this past June at the age of 12 years, four months and 25 days old. Tani, with a rating of 2230, is a few hundred points away from achieving his goal.

However, as an asylum-seeker, Tani faces special challenges. While many other chess players are able to easily travel to compete internationally, Tani’s family feels they should remain in the US. Even though they could apply to travel outside the country, they prefer to stay put while their asylum case goes through the court system.

Despite the efforts of governments and humanitarian organizations, people in many parts of Nigeria continue to face grave violations of human rights, widespread gender-based violence, kidnappings, forced recruitment, and suicide bombings. Boko Haram attacks in Nigeria have killed thousands and the violence has crossed borders into Cameroon, Chad and Niger. More than 3.2 million people have become displaced in Africa’s Lake Chad Basin region.

“The kidnapping, the killing, the persecution, it is still rampant now. That is why we left, said Tani’s father, Kayode, who now works as a real estate agent. “It’s not that easy to leave your people behind, your siblings, your parents, your in-laws…. But we need[ed] to run for our safety.”

Tani and his family are grateful for their new chance at life. They plan to invest the book and movie earnings in real estate as well as a college fund for Tani and his brother, Austin. As for Tani, he has learned important lessons about success.

“At the end of the day, my rating is just a number,” he said. “It really depends how strong you are inside.”