Women refugees take up key roles as a community representatives, teachers and even road workers in Bangladesh. 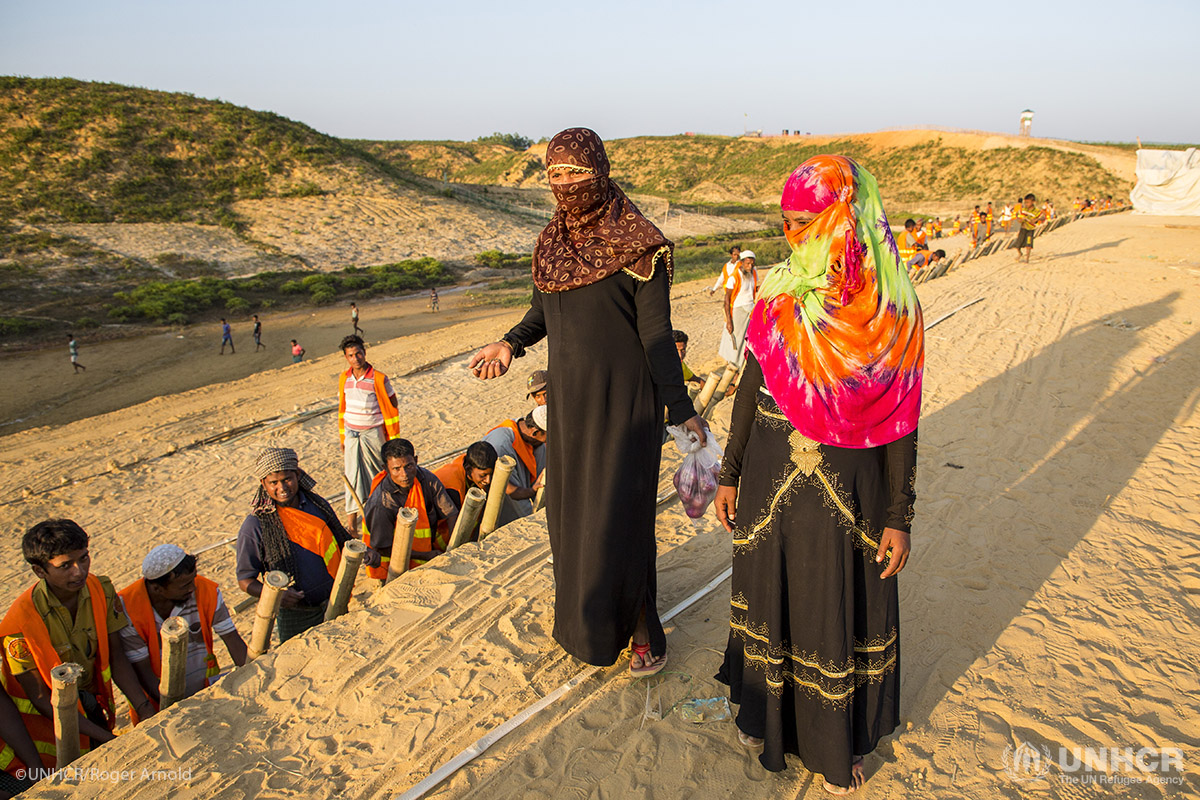 In a packed meeting room, Rohingya refugee Tansima raises her hand to speak up for her community.

“It will make it easier to access latrines and shops will be able to stay open after dark,” she adds.

Denied a voice or even basic rights in her native Myanmar, Tansima is among a growing number of Rohingya refugee women taking on key roles in Bangladesh, ranging from elected community representatives to teachers and even road builders and firefighters.

“We are the voices of our community, speaking on their behalf.”

Elected by the neighbors in her section of the sprawling camp, the mother of three meets regularly with residents to hear their concerns--ranging from access to aid distributions to questions about services and playgrounds for children.

She then joins with other elected community representatives to communicate the refugees’ concerns and interests to the Bangladeshi authorities that run the settlement, and the aid agencies that support them.

“We are the voices of our community, speaking on their behalf to government officials, UN and humanitarian partners and making sure their voices are heard,” she says.

Tansima’s role as a representative for her section of the settlement – which is home to 6,200 women, children and men – is in stark contrast to her life in Myanmar, where she never had a chance to go to school, move freely, get a job or speak out.

“This is a new experience for me. I am respected in my community, people listen to my advice and as a committee, we work together and coordinate,” she says.

Starting her day early, she visits the bamboo and plastic roofed homes with three other community representatives. Each section has four representatives: two men and two women. As respected leaders of their community, they raise awareness on key issues such as public health and emergency preparedness in the disaster-prone region.

As she grows into this role, she counts on the full support of her husband Selim. “I agree with my wife working and going out to help the community,” he says. “She is an integral part of our family and of the community, why shouldn’t she work?”

Among the growing number of refugee women filling key community roles is Nur, who teaches first and second graders.

“Back home I was only able to complete 10th grade due to movement restrictions, but I was very good in Burmese and math. Now I teach and help children,” says Nur, who works side-by-side with teachers from Bangladesh.

“I love to share my knowledge, and here it is another learning experience for me.”

Working alongside her at the school is Samia, 21. Married and the mother of a 1-year-old daughter, Samia teaches math and life skills. While conditions remain extremely challenging for refugees at the settlement, she is at least able to dream of a future for her children.

“What I want for my daughter is a good education,” she says.

More than 30,000 refugee women at the settlement are heads of their households. For many, such as Amira, being able to meet the basic needs for themselves and their family is key.

She works alongside half-a-dozen laborers improving a brick-paved access road, leveling the ground, landscaping and greening the roadside and moving sandbags and stones.

“I am happy and motivated,” she says, pausing from her work. “It gives me a small source of income to support my father – who is old and can’t work – and support my younger sisters.”

Because of the generosity of our donors, UNHCR is standing shoulder to shoulder with the women at the settlement, supporting them as they take a leading role in determining their futures.

The best way for you to help empower Tansima, Nur, Samia, Amira and refugees everywhere is to become USA for UNHCR’s newest monthly donor. Make your first gift today.