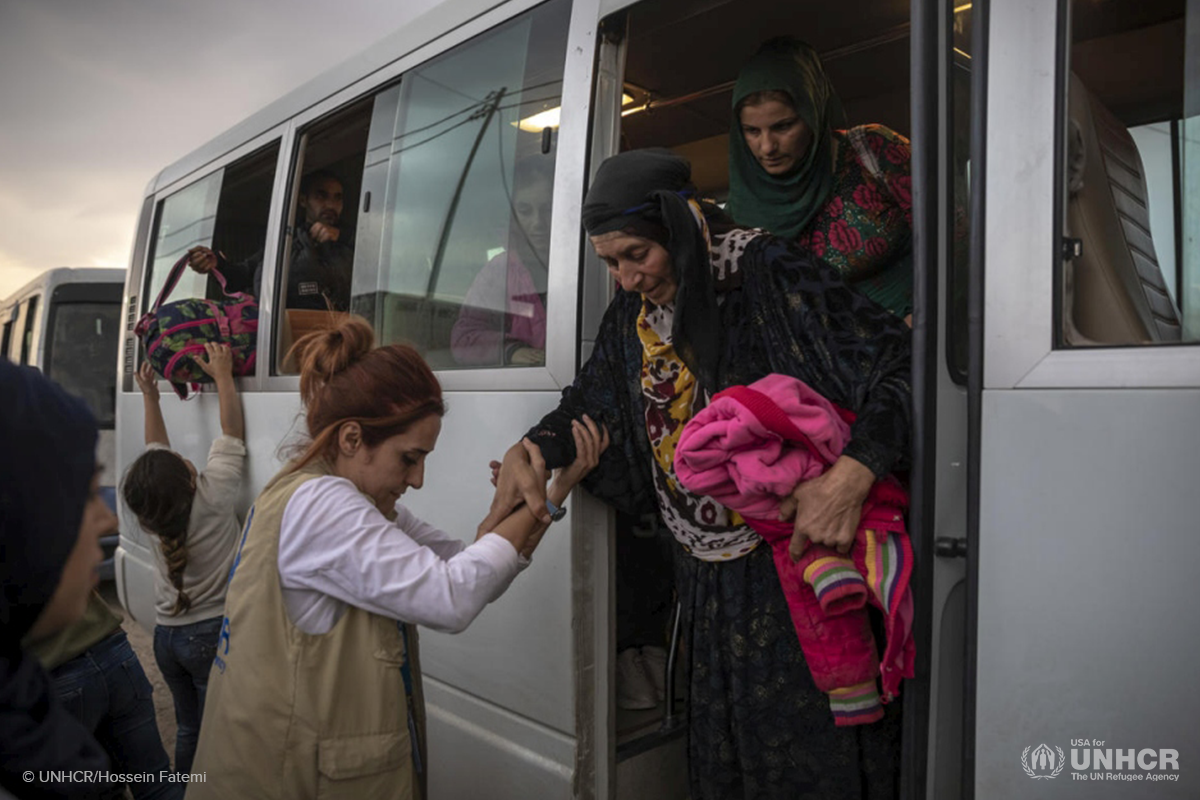 Teams from UNHCR, the UN Refugee Agency, in northern Iraq report that last night more than 900 Syrian refugees arrived at the Bardarash camp on 45 buses, bringing the camp population to nearly 9,700.

So far more than 10,100 Syrian refugees have crossed into Iraq seeking safety. Nearly 75% of all registered refugees are women and children. More than a quarter of refugee families are female-headed households. Arrivals also include unaccompanied children.

UNHCR and partners continue to provide lifesaving assistance to them. Our technical teams, protection and registration staff as well as our partners are in the camp every single day, assessing and meeting the needs as early as possible. They also ensure that all services in the camp are running and that new arrivals are immediately attended to and provided with the necessary aid and services.

UNHCR stresses the importance of freedom of movement for fleeing civilians and that the borders remain open so that refugees can seek safety and protection. UNHCR and other humanitarian partners are working with authorities of the Kurdistan Region of Iraq (KRI) and are committed to supporting their response to the latest refugee influx.

Bardarash camp, in Dohuk governorate, is ready to receive up to 11,000 people. Other nearby sites have been identified to shelter more refugees. We are grateful for the response of the local authorities, especially those of Dohuk governorate, for receiving and assisting the newly arrived Syrian refugees, in addition to more than 230,000 already there.

Many new arrivals need psychosocial support, children and adults alike. Last week at Bardarash camp, our psychosocial support team came across Dilwar, a three-year-old boy. He was in tears as he got lost from his mother upon arrival to the camp. Even after being reunited with his mum, Dilwar continued crying. She explained that Dilwar experienced loud explosions as they were fleeing their home. This made him agitated and sad and he could not stop crying. Our team attended to Dilwar, worked with him and their efforts were ultimately rewarded with a smile. UNHCR is coordinating with partners and other actors to ensure a blanket coverage of psychosocial first aid to all the new arrivals.

Meanwhile in Syria, some 180,000 people have been displaced across the country’s north-east according to the latest UN estimates. The majority of the displaced are women and children.

As part of inter-agency response inside Syria, UNHCR is providing emergency aid and protection services to thousands of people to ensure as much safety and dignity as possible for displaced families.

Those who fled their homes are seeking safety in collective shelters and with family and friends. To date, more than 75,000 newly displaced people in host communities, collective shelters and camps have received relief items through the network of UNHCR partners on the ground. This includes winter jackets, high thermal blankets and sleeping bags to ensure that families are protected from the cold.

UNHCR teams are currently assessing and repairing collective shelters in Hassakeh city. Where possible, they are connecting these shelters to the electrical grid to improve the living conditions and to mitigate the risk of sexual and gender-based violence. Teams are also installing water tanks and conducting basic repairs to ensure people can have safe drinking water.

Our protection teams are also meeting with displaced families in overcrowded schools used as collective shelters and responding to their needs. We are increasing the number of our mobile protection teams to reach both those sheltered in collective centers and people residing with family and friends. They left their homes with barely anything. Most of schools in Hassakeh city are currently being used to shelter thousands of displaced. This means that neither the displaced nor local children go to school and chances to continue their education soon are slim.

UNHCR, together with its national legal partner Syrian Arab Red Crescent is on the ground providing immediate legal support to the displaced families. So far, legal counseling for hundreds in collective shelters have taken place. This includes registration of newly born babies who also received their birth certificates.

UNHCR estimates its initial additional funding needs inside Syria at US$31.5 million within the existing appeal for Syria (HRP).