Together At Last: Abdi's nine-year journey to find his family

CONCORD, United States of America, June 25 (UNHCR) – When Batulo and Salad went to the airport in Manchester, New Hampshire one evening last month to fetch their 13-year old son Abdifatah, it was no ordinary airport pick-up. 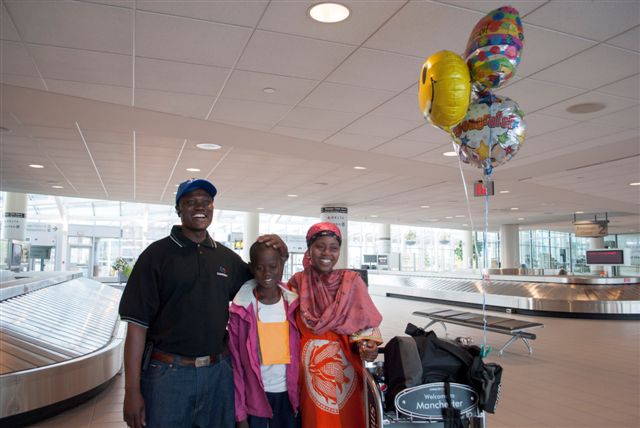 A happy Abdi is reunited with his parents in the United States. ©UNHCR/C.Chesley

The couple had last seen the boy nine years ago, in a refugee camp in Kenya. The emotional scene at the airport marked the end of a long and frustrating effort to reunite their family. "I'm so happy," Batulo said, "but I am also sad that it took so long."

Abdi was born in the Dadaab refugee camp in north-eastern Kenya. The camp is where his Somali parents grew up, met and married. His older sister Halima and two younger sisters were also born in the camp. But in 2004, when the family left Kenya for resettlement in the United States, Abdi was left behind.

His mother explains that at the time of the family's resettlement interview with the US immigration authorities, the boy's paternal grandmother had taken him with her to visit a sick relative outside the camp. Batulo and her husband pleaded to have Abdi included in their case, even though he was absent, but were told that this was not possible.

When the family's departure date came and Abdi wasn't on the list of refugees authorized to travel, a camp worker told them that they had to leave as scheduled, or forfeit their chance to go to America. Abdi, the worker said, could join them later. Thus began their nine-year struggle to reclaim their son.

Batulo, Salad and their three daughters were among around 13,000 Somali Bantu refugees resettled by the United States between 2003 and 2007. They were placed in Concord, New Hampshire, a city of some 43,000 people where, when the family arrived, there were hardly any Somali residents.

The state legislature debated a bill to impose a moratorium on refugee resettlement; the bill passed in the House of Representatives but failed in the Senate. On a couple of occasions, racist graffiti was scrawled on refugees' homes in Concord – including on Batulo and Salad's house.

Despite these challenges, the family settled in. The children enrolled in school, the parents found jobs, learned English and made many American friends. Batulo planted two flourishing vegetable gardens and was named "employee of the year" at the local hotel where she works.

The family even managed to get used to the long New Hampshire winters – the first snow usually falls in November and the ground stays frozen until late April. But they never came to terms with the fact that one of their children was still in a refugee camp.

As soon as they arrived in 2004 they began asking for help to have Abdi join them. There is a special provision in US law that allows refugees, within two years of their arrival, to apply to be joined by spouses and minor children left behind. But they missed that window of opportunity.

As refugees, they could also file for family reunion under the P-3 category of the US resettlement programme. But by the time they managed to get the necessary papers filed it was 2008, and the US had suspended processing of family reunion cases from the camps in Kenya because of fear of fraud.

It also took the family time to raise the funds for the DNA tests required by the US authorities to prove that Abdi was indeed their son. When processing of family reunion cases finally resumed in 2012, there were still medical exams and security checks to be completed. Finally, just before Christmas 2012 they were told that Abdi was "travel ready." Four months later, he finally boarded a flight to the United States.

"This case shows how important it is to make sure that refugees get competent legal advice in a timely manner," says Cathy Chesley, director of immigration and refugee services at New Hampshire Catholic Charities. "This child spent nine years without his parents – unnecessarily."

When Abdi finally arrived, the family invited their Somali and American friends to celebrate. Abdi's siblings, including several born in the US whom he had never met, decorated the party room with home-made "welcome home" posters.

Eleven-year old Fartun handed every guest a flyer she had written herself. It read: "Abdi is my older brother and is 13 years old. I have not seen him for nine years . . . When I was in Africa I was a young child so I didn't see his face much, but I know he is my brother. He is the second oldest in my family and he is a very nice brother to have. I bet he will be really happy when he sees us. Most of my family members have never seen Abdi because they are too young, but we have talked to him on the phone and my mom showed us a picture of him. We are all so happy to be seeing his face and he can live with us forever!"