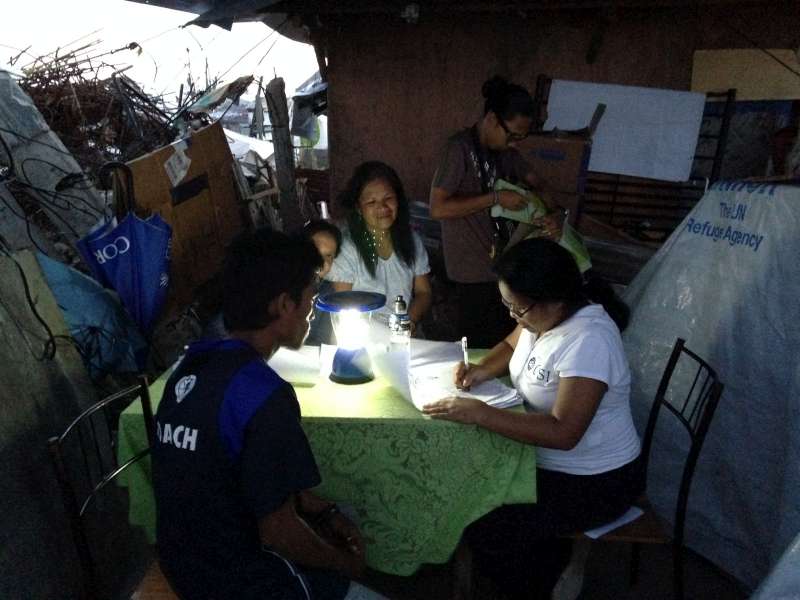 UNHCR has distributed thousands of lamps to people affected by Typhoon Haiyan, including this family in Barangay 89 of Tacloban City ©UNHCR/K.deGruijl

Much of the disaster zone remains without power, but in areas where UNHCR had distributed the solar lamps to 6,000 families, the nights have brightened up. On Saturday at nightfall, Mila Batica, 47, was still washing clothes outside her tent – also provided by UNHCR – at Barangay 89, one of the hardest-hit coastal districts in Tacloban City.

Batica's husband, a carpenter, was not expected to arrive until later in the evening. She still had time to cook for the family – thanks to the glow of the lamp she received earlier in the day. "Now, we take our evening meal together. We used to do this, until the storm came," said the mother of seven children.

It gets dark by 5:30 p.m. Before UNHCR distributed the lanterns, there had been no light in the makeshift houses and tents at Barangay 89 since Haiyan raked the region with peak winds of 315 kilometres per hour, the strongest cyclone on record to make landfall.

"That's when problems could occur, communities feel unsafe without lighting," said Arjun Jain, head of the UNHCR emergency team that was among the first to respond to the government's call for assistance.

"The idea behind these solar lanterns is to bring some normalcy to these communities so people can feel safer, the children can play, the parents can find ways to continue their work after dark," he said. "You see families getting together at night, which they could not do otherwise."

Fishermen use lanterns to catch fish and lobsters in the region, where fishing is one of the main sources of livelihood.

"The lamps are a protection tool," said Jain. "It can prevent people from being harassed when, for instance, they go to toilets. They can bring the lantern with them. In many cases, that's where they are exposed to possible exploitation."

The solar lantern, which provides illumination from six to eight hours, also allows the charging of cell phones – used by affected people to look for day jobs and find the best markets for the fish catch.

As part of the inter-agency response, UNHCR plans to distribute 13,000 more lanterns alongside other household relief items in support of the government's Department of Social Welfare and Development.

The typhoon affected some 14 million people. More than 1.1 million houses were either totally or partially destroyed.

The government estimates that fewer than 100,000 Filipinos remain in 385 evacuation centers. As the majority of the displaced have returned to their devastated communities and built makeshift houses, the government is starting to work towards rehabilitation and early recovery. UNHCR and other agencies are helping the authorities to decongest schools that are currently used as evacuation centres before classes resume after the holidays.

To date UNHCR has provided emergency assistance to some 183,000 people, including plastic sheeting and family tents. These temporary shelters have mushroomed as mountains of debris are being cleaned up, showing an emerging semblance of normalcy.

"Together with the solar lanterns, tents, even as temporary shelter, help to regain a sense of normalcy," said Jain. "It's a small step, but I think it's an important step. Communities are getting back their confidence. I think the word is dignity. You can feel it in the families. You can feel it in the communities. Nothing is going to be the same, but it's a start."

By Fernando Del Mundo in Tacloban, the Philippines