NIAMEY, Niger, March 11 (UNHCR) – The UN refugee agency on Tuesday said it was increasingly alarmed at the humanitarian impact of continuing violence in north-eastern Nigeria and stressed the importance of protecting civilians. 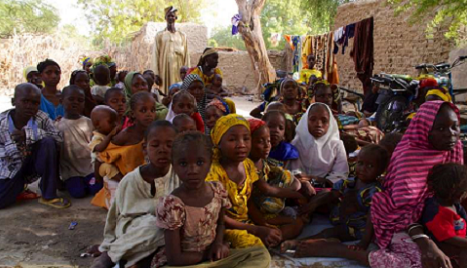 A group of refugees gather in the yard of a local man in Bosso, Niger. During the night, they stay with other families in the area. © UNHCR/C.Amaud

Newly arrived refugees interviewed by UNHCR staff in Niger have spoken of atrocities on the islands and shores of Lake Chad in north-east Nigeria's Borno state.

"One woman described corpses strewn through houses and floating in the water. She said people feared staying even to bury their dead or find missing relatives. Others recounted fleeing a village shooting incident and said women and children were being kidnapped and taken away by unidentified assailants," UNHCR spokesman Adrian Edwards, in Geneva, told journalists on Tuesday.

The latest attacks are reported to have begun in mid-February and were continuing five days ago, Edwards said. "In all some 2,000 people have crossed into south-east Niger's Diffa region over the past four weeks according to our partner, the International Rescue Committee," he added. In addition to the attacks on Lake Chad, some of the new arrivals have come from conflicted areas near Borno's state capital, Maiduguri.

"UNHCR reiterates to all parties to the conflict in north-eastern Nigeria the vital importance of protecting civilians from harm," Edwards stressed. The insurgency in the three north-eastern Nigerian states of Yobe, Adamawa and Borno has displaced more than 470,000 people inside Nigeria. Refugees arriving in neighbouring Cameroon, Chad, and Niger are in addition to this.

Since Nigeria declared a state of emergency in the three states in May 2013, more than 57,000 people have fled to Cameroon, Chad and Niger. Some 17,000 of these are registered Nigerian refugees. The rest are nationals of the surrounding countries who had been living in Nigeria for decades.

Niger has received the majority – some 40,000 concentrated in the Diffa region, a desert in the country's eastern edge.