DAMASCUS, Syria, July 4 (UNHCR) – Aid provided by the UN refugee agency has been distributed to some of the neediest local and forcibly displaced families among the 10,000 people living on Arwad, Syria's only inhabited Mediterranean island. 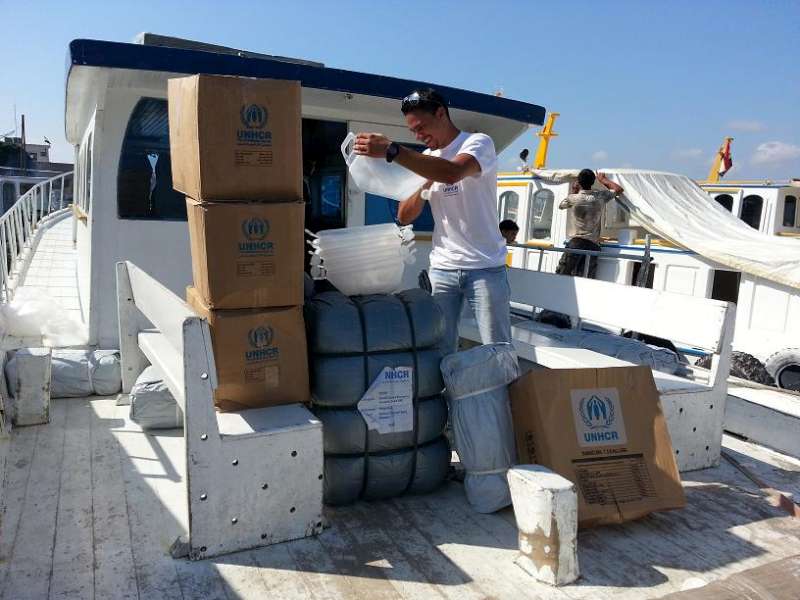 An aid worker checks relief items on one of the boats that brought the UNHCR aid to Arwad Island. ©UNHCR Syria

The head of the municipality confirmed at the weekend that most of the emergency relief items had been distributed in late June to 119 local families (600 people) and almost 60 families (300 people) who sought shelter on Arwad after fleeing their mainland homes in Homs or Aleppo. All the displaced have been hosted by families living on the island, many of whom are relatives and friends.

The aid items — mattresses, sleeping mats, blankets, plastic sheeting, hygiene kits, kitchen sets, jerry cans, nappies for the young and older people, and sanitary napkins — were taken on June 23 to the Syrian port of Tartus and then loaded onto three boats for the 20-minute journey to Arwad. They were stored in two empty cafés, which doubled as warehouses and distribution centres. The distribution was conducted by the Syrian Arab Red Crescent.

A small UNHCR team had earlier visited Arwad to assess the needs of people on the island, where the main livelihood is fishing, and to identify those who should receive assistance. They found that hygiene items, including the nappies and sanitary napkins, were in particular demand.

The UNHCR staff also said the economic situation on the small island appeared to have worsened since the Syria crisis began more than two years ago, and the fisheries industry has suffered due to the insecurity.

Elsewhere in Syria, UNHCR has for the first time sent life-saving medicine to East Ansari, a densely populated area of eastern Aleppo that has been out of governmental control since the beginning of the crisis. The medicine was delivered last Thursday to the Al Zarzour Hospital by the Syrian Arab Red Crescent on two trucks.

The medicine will be used for emergencies and to treat more than 6,000 people suffering from chronic diseases. The Al Zarzour hospital is one of the few still functioning in Aleppo, Syria's second largest city. The medical infrastructure in Aleppo, particularly in contested areas, has been seriously impacted by the conflict.

"The general humanitarian situation in Aleppo is very bad, but the health situation is particularly serious. Many public hospitals are not functioning," said Tarik Kurdi, UNHCR's representative in Syria. The delivery was made possible after discussions with the government, the Syrian Arab Red Crescent and all other parties in the area. Turki said that while the delivery of medicine was welcome, "this assistance is far from being enough. We need and we are trying to have more convoys of this type."

Over three days last week, UNHCR gave cheques to 394 particularly vulnerable families (more than 2,000 people) staying in collective centres in conflict-ravaged Homs. Most were worth $150. In total, UNHCR plans to support 15,000 vulnerable families in Homs this year, if security conditions permit.

In Qamishly, UNHCR has since last week given cash grants to more than 10,000 people (1,895 families). The cash distribution will continue this week and help up to 4,000 displaced families. The objective for the year is to help up to 20,000 families in Qamishly and Hassakeh governorate.

So far this year, UNHCR assistance has reached more than 1.2 million displaced Syrians across all 14 governorates of the country.

Support the UN Refugee Agency's response to the Syria emergency!