UNHCR to build and expand camps for South Sudanese refugees

GENEVA, January 17 (UNHCR) – The UN refugee agency said last Friday that UNHCR teams are working to establish new camps and expand existing ones in neighboring Uganda, Ethiopia and Kenya to cope with the influx of refugees from South Sudan. 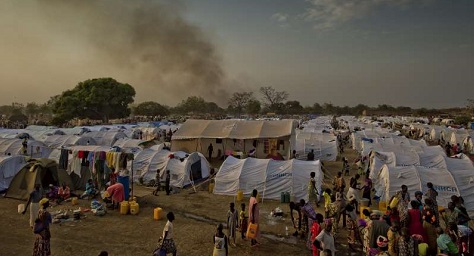 Evening approaches at the Dzaipi transit centre in northern Uganda, where UNHCR has erected tents for many of the refugees. © UNHCR/F.Noy

The funding is needed to help people who have fled either country or sought shelter elsewhere within South Sudan or the Central African Republic (CAR).

UNHCR spokesman Adrian Edwards told journalists in Geneva that since conflict erupted in South Sudan in mid-December, more than 86,000 South Sudanese have crossed into neighboring countries. "With people still arriving at a rate of around 1,000 a day, we are looking at the prospect of refugee numbers exceeding 100,000 by the end of January," he said.

Inside South Sudan, people are reported to have moved to border areas, where they can cross to neighbouring countries should the situation further deteriorate. Just inside Uganda at Nimule there are now thousands of people. Others are reported in areas bordering Sudan and its neighbouring regions of East Darfur, South and West Kordofan.

According to government data, there are now 46,579 South Sudanese refugees in Uganda. Ethiopia has received 20,624, and Kenya at least 8,900. An estimated 10,000 people have also crossed into Sudan's South and West Kordofan states, which are themselves facing armed violence. The government of Sudan has registered 1,371 of them as refugees while the rest are mostly nomads.

In Uganda, there is still serious overcrowding at the Dzaipi transit center in Adjumani district in the country's north. People are contending with issues relating to hygiene, food and lack of water. Although some 10,000 people have so far been moved to the nearby Nyumanzi settlement, the centre at Dzaipi, designed for 400 people, is still hosting more than 20,000 refugees.

"UNHCR is racing to transfer around 500 families daily to decongest Dzaipi transit center as more refugees arrive. We are meanwhile rehabilitating former sites in Nyumanzi and nearby at Baratuku where a primary school and health center need to be upgraded," Edwards said in Geneva.

Water is the most urgent of the challenges, with some of the recently moved refugees reporting a wait of up to four days to get water. Shelter and health are also problematic, with many people sleeping in the open.

Most of the newly arriving South Sudanese are under 18 years of age and many of them have been asking for secondary and tertiary education opportunities. For children without close family members, UNHCR is providing separate shelter and identifying foster caretakers within the community, but further support is still needed.

"UNHCR is urging partners and other humanitarian organizations to assist in building up these settlements," spokesman Edwards said. "In the meantime, we have created a second transit center in the same area, with a capacity for 4,000 people, and where incoming refugees are now being taken."

All refugees relocated to the settlements around Adjumani are given basic relief items including blankets, mats, cooking equipment, jerry cans and materials to construct houses. They are also given small plots of land on which to build their houses.

In Ethiopia and Kenya, refugees are facing similar challenges in terms of clean water, health, sanitation, shelter and education. In Kenya, in particular, UNHCR staff members are seeing many children separated from their parents. "By setting up new camps and expanding existing ones in both countries, we will be in a better position to address the news of the growing refugee population," Edwards noted.

UNHCR needs $58.8 million to respond to the South Sudan humanitarian crisis until the end of March.