World Water Day: Water brings life to refugee village in Uganda, and income to one family

NAKIVALE, Uganda, March 22 (UNHCR) – Iraguha Nkuriza Ferecian casts carefully measures chemicals into three large metal vats of scummy water from Lake Nakivale, then climbs down a rickety ladder, secure in the knowledge that in just three hours he'll be well on his way to supplying clean water to thousands of fellow Congolese refugees in this settlement in Uganda. 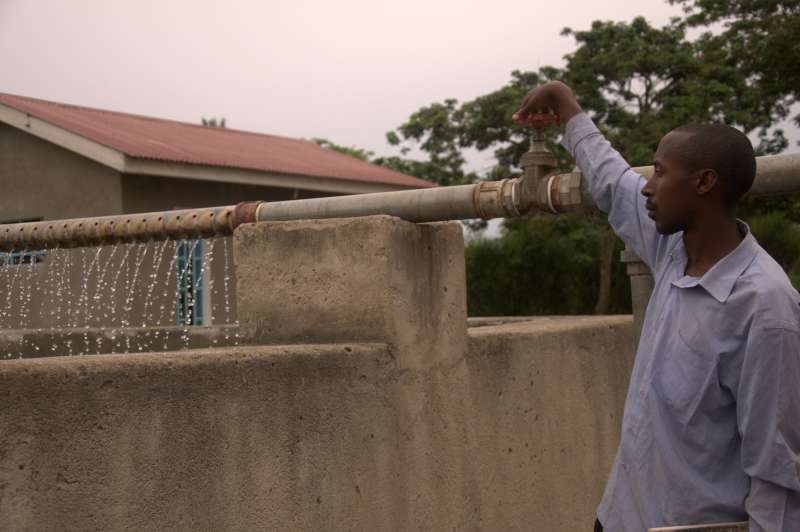 Congolese refugee Iraguha Nkuriza Ferecian, aged 26, is running the newly purified lake water into tanks for distribution to refugees in Nakivale refugee settlement, Uganda. He has been working as a water system operator for UNHCR for two years. ©UNHCR/L.Beck

The 27-year-old has been a refugee since fleeing attacks on his family and neighbors in the Democratic Republic of the Congo when he was just nine. After getting a UNHCR scholarship to study at secondary school, and undergoing specialist training to become a water systems operator, he's now giving back.

"I can now teach my fellows to boil water before drinking and clean their containers before using them," he says, explaining the importance of access to clean, safe water. For Iraguha, World Water Day doesn't just come on March 22 – it's every day.

Unlike many countries where refugees are confined to camps, Uganda permits them to live in settlements indistinguishable from local villages, and to farm for themselves. The Nakivale refugee settlement is enormous, covering the same geographical area as the Indian city of Kolkata.

UNHCR provides clean water to the 68,000 refugees and asylum-seekers – and also to some 16,000 Ugandans who live alongside the refugees in the settlements. This helps diffuse possible tensions and promote the peaceful co-existence between refugees and the local host communities as well as helping out Ugandans, many of whom are also desperately poor and lacking facilities.

The Democratic Republic of the Congo (DRC) is now a distant memory for Iraguha, whose younger brothers were born as refugees in Uganda. Two of his sisters were separated from the family during their flight 16 years ago and have never been heard from since. He can't imagine going back to the turbulent eastern DRC after spending the majority of his life here in Nakivale.

"I don't have hope of going back – my neighbors and relatives are still being killed," he claims. "Whether we die here or get a chance of going anywhere else is God's mercy."

His work at the UNHCR water plant allows him to support his elderly, disabled parents and four younger siblings. Iraguha gets paid around US$40 a month to run the water purifying plant – treating the water with chemicals to help make sure it is safe to drink, supervising the other seven workers at the plant and reporting any mechanical problems back to UNHCR staff.

From those three metal vats where the water and chemicals settle for three hours, purified water flows into cement holding tanks and along pipes to communal taps throughout the vast settlement. It can then be used for drinking, cooking, cleaning and watering crops. The water taps are managed by the refugees themselves, who are responsible for their maintenance through water committees.

"I am happy to be helping my brothers and friends to get water," says Patrick Ekanga, a Congolese refugee, father of triplets and a technician at a water tap in Nakivale's New Congo village. "Without water no one can survive."

Once a taxi driver in DRC, for the last nine months he's replaced water taps and done minor repairs for his water committee.

Iraguha and Patrick don't need to be told that World Water Day celebrates the importance of water cooperation and the good management of water. Says Iraguha: "Water is life – when there is water we have life."

By Lucy Beck in Nakivale, Uganda