GENEVA, 23 August (UNHCR) -- One million Syrian children have now been registered as refugees, forced from their homeland by a war that is well into its third year, the United Nations announced on Friday. 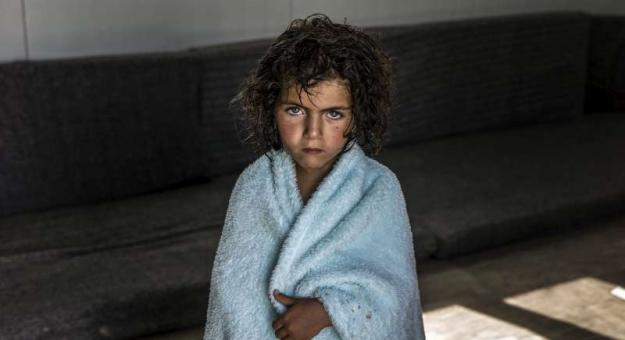 This girl sheltered in Zaatari refugee camp in Jordan is one of a million Syrian children who have become refugees because of the war. ©UNHCR/O.Laban-Mattei

"What is at stake is nothing less than the survival and wellbeing of a generation of innocents," António Guterres, High Commissioner of the UN refugee agency (UNHCR) that has counted each member of the exodus, said in Geneva.

"The youth of Syria are losing their homes, their family members and their futures. Even after they have crossed a border to safety, they are traumatized, depressed and in need of a reason for hope."

Children make up half of all refugees from the Syria conflict, according to UNHCR and UNICEF. Most have arrived in Lebanon, Jordan, Turkey, Iraq and Egypt. Increasingly, Syrians are fleeing to North Africa and Europe. Latest figures show that of the one million Syrian refugees under the age of 18, some 740,000 are children under the age of 11.

"This one millionth child refugee is not just another number," UNICEF Executive Director Anthony Lake said in New York. "This is a real child ripped from home, maybe even from a family, facing horrors we can only begin to comprehend."

"We must all share the shame," said Lake, "because while we work to alleviate the suffering of those affected by this crisis, the global community has failed in its responsibility to this child. We should stop and ask ourselves how, in all conscience, we can continue to fail the children of Syria."

Inside Syria, according to the Office of the High Commissioner for Human Rights, some 7,000 children have been killed during the conflict. UNHCR and UNICEF estimate that more than 2 million children have been internally displaced within Syria.

The physical upheaval, fear, stress and trauma experienced by so many children account for just part of the human crisis. Both agencies also highlight the threats to refugee children from child labor, early marriage and the potential for sexual exploitation and trafficking. More than 3,500 children in Jordan, Lebanon and Iraq have crossed Syria's borders either unaccompanied or separated from their families.

The largest humanitarian operation in history has seen UNHCR and UNICEF mobilizing support to millions of affected families and children.

More than 1.3 million children in refugee and host communities in neighboring countries have been vaccinated against measles this year with the support of UNICEF and its partners. Nearly 167,000 refugee children have received psychosocial assistance; more than 118,000 children have been able to maintain their education inside and out of formal schools.

UNHCR has registered all 1 million children, giving them an identity. The agency helps babies born in exile get birth certificates, preventing them from becoming stateless. UNHCR also ensures that all refugee families and children live in some form of safe shelter.

But more remains to be done, said the two agencies. The Syria Regional Refugee Response plan, which calls for $3 billion dollars to address the acute needs of refugees until December of this year, is currently only 38% funded.

More than $5 billion has been called for to address the Syria crisis, with critical needs in education, health care and other services for children and child members of host communities. More resources need to be devoted to developing strong networks to identify refugee children at risk and to provide them, and their host communities, with support.

More funds are only part of the response needed to address children's needs, the UN agencies said.

While intensified efforts are needed to find a political solution in Syria, parties to the conflict must stop targeting civilians and cease recruitment of children. Children and their families must be safe to leave Syria and borders must remain open so they can cross to safety.

Those who fail to meet these obligations under international humanitarian law should be held fully accountable for their actions, said the two agencies.