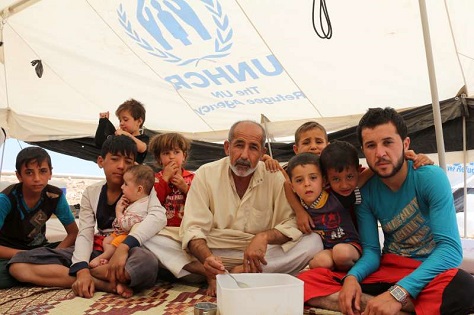 Saleh and his family inside their tent in Garmawa camp after escaping when fighting reached the city of Tal Afar. They drove in a packed minibus to the Bedrike checkpoint in Duhok governorate in Iraq's Kurdistan region of Iraq.© UNHCR/R.Hussein.

GARMAWA, Iraq, June 26 (UNHCR) – A week ago, there were 50 Iraqi families at the Garmawa camp for Iraqis displaced by fresh conflict; today, it is home to 173 families, or more than 1,000 uprooted civilians. More are arriving every day as conditions at the camp in Iraq's Kurdistan region improve.

While accurate numbers are difficult to obtain, government officials say at least 300,000 people have temporarily settled in the Kurdistan Region of Iraq. They are coming not only from Mosul, Iraq's second largest city, but also from other communities.

Saleh, his wife and eight children fled from the city of Tal Afar, 31 miles west of Mosul. "I escaped immediately after the fighting started," he says from his temporary home, a UNHCR tent in the Garmawa camp for the internally displaced.

Kurdistan regional government officials started creating Garmawa almost two weeks ago, as soon as it was clear that many of those fleeing the fighting were heading to the comparatively peaceful northern region.

The camp has come a long way in those two weeks. What was a vacant piece of land earlier this month now holds 1,100 UNHCR tents and the refugee agency has distributed mattresses and blankets. There is electricity, water, bathrooms and washing facilities. The most recent improvement is a small primary health care center provided by the government and staffed with two doctors, a pharmacist and a nurse.

Iraq's newest wave of internally displaced people (IDPs) is now scattered across the country, but most of the IDPs are in the Kurdistan region.

One camp will not be enough, so the regional government and its humanitarian aid partners intend to build more. One camp housing 2,500 displaced has already taken shape in a former wheat field at Khazair, south of Erbil. Three more are under construction or in the planning stages.

"We are deeply involved in coordination activities and the operational response to this crisis," says UNHCR Senior Field Coordinator Andrei Kazakov. "UNHCR is working in three critical aid sectors, providing protection, shelter and emergency [relief] items to the displaced. We have to remember, most fled with nothing."

UNHCR protection teams have fanned out across the region to gather information on where IDPs are settling and what they most need. They have met with more than 6,600 families. That information is then shared with other humanitarian agencies so the overall response can be swift, efficient and far-reaching.

But Saleh and others may be here for a while. "I am not planning to take my family back to my town before it is entirely safe and secure," he says in Garmawa, where the displaced at least have shelter, food, water and safety. For parents like Saleh, concerned about their loved ones, those are essential attributes.

By Husam Eldin Mustafa and Rasheed Hussein in Garmawa, Iraq