Conditions worsen and people struggle to access resources in Ukraine

The UN refugee agency is "extremely concerned" about the worsening humanitarian situation in eastern Ukraine, particularly in the areas controlled by anti-government forces. UNHCR spokesman William Spindler said the lack of access to benefits and services previously provided by the central authorities has drastically worsened the plight of the civilian population in these areas. "This has been further aggravated by restrictions to the movement of people and goods," he told journalists in Geneva.

Conditions in northern Donetsk and in Luhansk are particularly dire, with the supply of water and electricity often disrupted by shelling and rocket attacks. Heavy shelling resulting in civilian deaths continues to be reported, especially around the town of Debaltseve, which was the scene of heavy fighting in January and February.

"The fighting makes the delivery of humanitarian aid to the many civilians trapped in the conflict areas extremely difficult. The scarcity of basic supplies, including food, fuel and medicines, has driven up prices of available supplies," Spindler said.

"Living conditions, particularly for those with damaged homes or sheltering in bunkers and basements under the rubble of their houses or apartment buildings, have been exacerbated by cold weather and low temperatures," he added. Freedom of movement is an issue and civilians are often trapped in the conflict zone. Lack of available and affordable transport, insecurity along exit routes and administrative barriers are preventing civilians from reaching safety and UNHCR staff report that many people in these areas feel abandoned.

The Ukrainian authorities have evacuated more than 11,000 people (including over 2,240 children and almost 350 people living with disabilities) from Donetsk and Luhansk, "but assistance to evacuees continues to fall far short of demand, particularly in the provision of accommodation, transport, information and maintaining family unity," Spindler stressed. 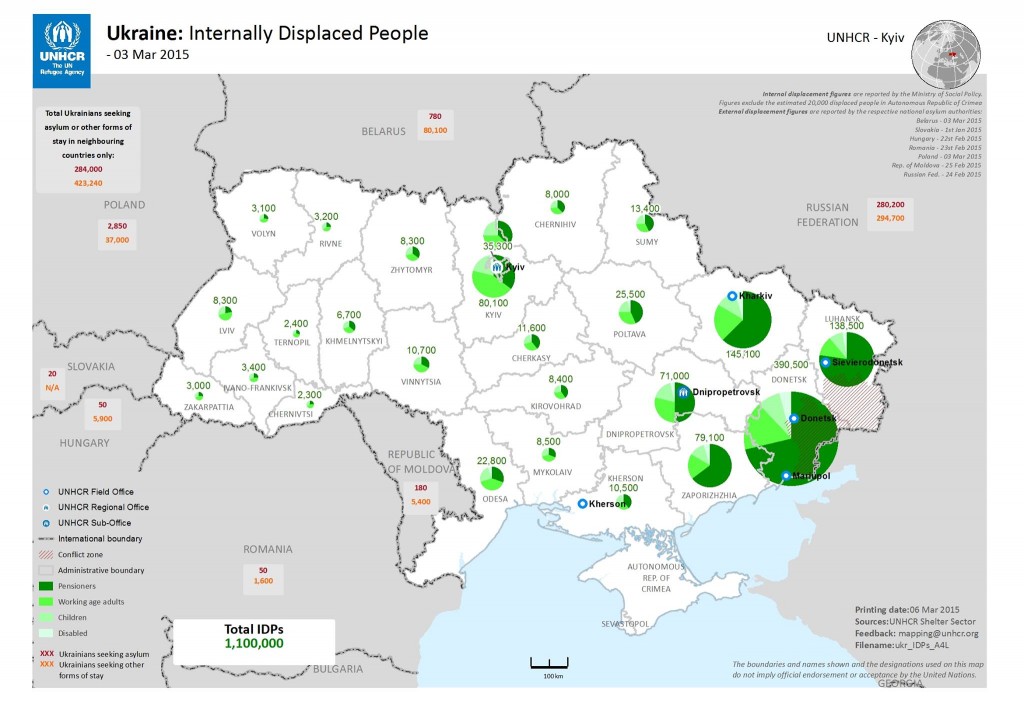 Despite security risks, UNHCR and partners have delivered emergency non-food aid to some of the neediest civilians, including in areas that had been under frequent bombardment. For the first time, UNHCR has delivered aid to two areas in Luhansk-Novopskov and Markivka. According to local authorities, around 30 per cent of the displaced population in Novopskov and Markivka received assistance.

Distributions also took place in Debaltseve and in the nearby village of Nikishyne, where many houses have been damaged or destroyed by recent fighting. In addition, some 11,500 people in the Donetsk region received non-food humanitarian assistance from UNHCR in February. "UNHCR is continuing to scale-up its presence in Donetsk city and is currently looking at the feasibility of an increased presence in Luhansk," Spindler said.

As part of the overall UN response to the situation in Ukraine, UNHCR co-leads the protection cluster and leads the shelter and non-food Items cluster. The number of people internally displaced by the conflict in Ukraine has now reached the 1.1 million mark, while the total number of Ukrainians who have sought asylum, residence permits or other forms of legal stay in neighbouring countries now stands at 674,300, including 542,800 in Russia and 80,700 in Belarus.

Learn more about the conflict in Ukraine