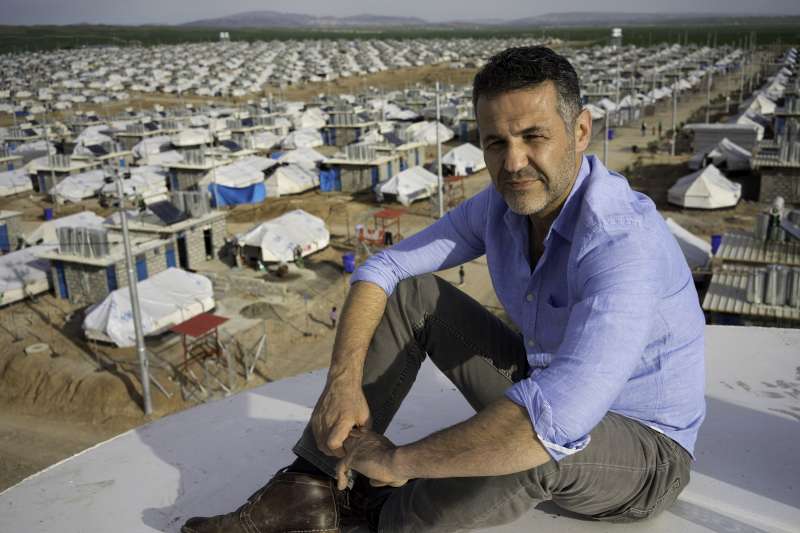 UNHCR Goodwill Ambassador Khaled Hosseini gets a bird's eye view of Darashakran Refugee Camp during his visit to meet Syrian refugees in the Kurdistan Region of Iraq. © UNHCR/B.Sokol

ERBIL, Iraq, March 27 (UNHCR) – Best-selling author and UNHCR Goodwill Ambassador Khaled Hosseini has called on the international community to do more to help the tens of thousands of Syrians living in camps or towns across northern Iraq while praising the resilience of refugees.

Hosseini, a former Afghan refugee, made the appeal at the end of a three-day visit this week to the Kurdistan Region of Iraq. He said that while much had been done by the government and aid organizations to meet the basic needs of the 220,000 registered Syrian refugees in the north, "much more is still needed."

"With more and more people fleeing into Iraq every day, there is an urgent need for international donors to come forward with any kind of support possible," stressed the author, who is best known for his first novel, "The Kite Runner."

"During my time in the Kurdistan region, I had the opportunity to speak with Syrian refugee families living both inside and outside camps, many of whom lost everything during their flight," Hosseini said.

''The reality is, that with no end in sight to the violence and bleak prospects of returning home, it is crucial that the international community do more so that Syrian refugees in Iraq continue to be protected," he added.

The Syrians in northern Iraq have, like millions of their compatriots, been forcibly displaced by conflict since the Syrian crisis began in March 2011. This population movement includes more than 2.5 million refugees and 6.5 million internally displaced.

In northern Iraq, Syrians began coming across the border from eastern Syria and elsewhere. More than 96,000 are living in 12 camps or transit centres, while the rest are living mainly in urban areas.

Hosseini, who is now a United States citizen, visited the Kawergosk and Darashakran camps (with a combined total of about 20,000 refugees) for a first-hand look at what life is like for families living there and to see the facilities available, including schools, health centres and child friendly spaces.

Among those he spoke to was a 14-year-old girl called Payman, who told him that she loved writing. "I was able to exchange with her ideas about writing and what writing means to me, what it means to her. Even though I didn't speak her language, I was able to connect with her," said Hosseini.

"To me, she is one of the pictures of the almost incalculable damage and loss experienced by the Syrian people because of this war," added the author, who has written three best sellers to date.

With around 60 per cent of the Syrian refugee population in Iraq concentrated in locations outside camps, the Protection Assistance Reintegration Centres are an essential part of the refugee response operations in Iraq.

This was Hosseini's first visit to Syrian refugees in the region as a UNHCR goodwill ambassador. His trip will help to keep the spotlight on the suffering and needs of the displaced in Iraq and the other main host countries – Lebanon, Turkey, Jordan and Egypt.

UNHCR has been supporting the government of Iraq and the Kurdistan Regional Government to coordinate the humanitarian response to the refugees' protection and assistance needs. This includes the provision of registration and documentation, child protection, sexual and gender-based violence protection interventions, the provision of shelter, life-sustaining items and access to basic services, including legal and psycho-social support.

Since first teaming up with UNHCR in 2006, Hosseini has visited his native Afghanistan in 2007, 2009 and 2010 and Chad in 2007. His Khaled Hosseini Foundation also supports UNHCR projects to provide employment and education opportunities and health care for women and children.

"Everywhere I go, I am struck with the resilience of people," said Hosseini. "This resonates with me and I feel some sense of kinship, some part of my own background, my own family story. I have always found something in common with them no matter how different our backgrounds are."

By Sulakshani Perera in Erbil, Iraq