AMMAN, Jordan, April 3 (UNHCR) – Most of the global media's coverage of Syrian refugees in Jordan has focused on Za'atari, a camp carved out of the harsh desert landscape in northern Jordan. 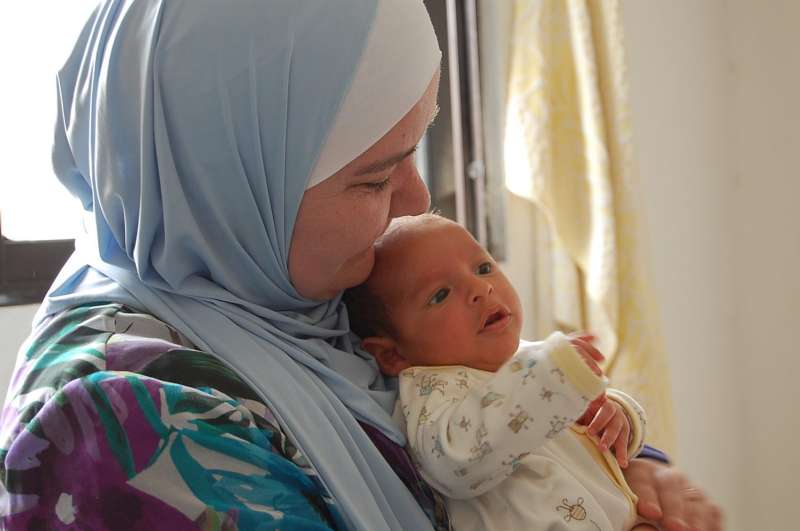 The many images of Za'atari show row upon row of tents in what is now a small city. But some three-quarters of the hundreds of thousands of Syrian refugees in Jordan live outside the camps, in villages, towns and cities across the country. Many are housed in one bedroom apartments, basement studios or rooftop dwellings, often with two or three families sharing. In comparison to a camp situation, where services and assistance are provided, refugees in cities and towns can be almost invisible, many of them struggling to survive. UNHCR has deployed field teams to reach out to these refugees in the capital, Amman, and across the country. Many of these vulnerable people are at risk of eviction. The members of the UNHCR mobile teams, such as Field Associate Huda Al-Shabsogh, assess the needs of the urban refugees, give advice and counseling, arrange for them to register as refugees, and more. Al-Shabsogh, a native of Amman and mother of three, started working for UNHCR in 2007. The qualified lawyer talked recently with Regional Public Information Officer Reem Alsalem. Excerpts from the interview:

Describe a typical day in your life as an emergency worker

My day normally starts very early. At 5:30a.m. I help my children get ready and then I go to the office. We visit refugee communities on Sundays and Wednesdays and usually head out at 7:00 am so that we can make the most of the day. From the moment we arrive at the destination for the day, around 8:00 or 8:30 in the morning, we start meeting with refugees. Normally we work in groups of two. As a team, we see a minimum of 200 families a day, sometimes 300.

What do you do when you meet the refugees?

I am part of what we call the help desk. We counsel refugees on all sorts of issues: how to register; how to enroll their children in school; what to do if their children get sick or are sick. And we give them appointments to register with UNHCR in Amman or to renew their registration. We also provide these services in Ramtha, Zarqa and Mafraq.

We have similar activities for urban refugees in Amman, Irbid and, more recently, Maan in the south of Jordan. We will go there twice a month – more regularly if the need increases. This is great news because Maan is very far from Amman and it would be difficult for refugees to come to us.

Even though we have many families to attend to during an average day, there is never enough time. During the interviews, the refugees take the opportunity to ask us many questions, and not just about basic services. Even though UNHCR has telephone hotlines, the refugees prefer to have the face-to-face interaction. They feel more at ease. Also, our lines are often busy. We answer up to 700 calls a day –most of them from Syrians.

Why is registration so important in Jordan?

It's important because it allows those registering to get assistance from UNHCR, WFP [World Food Programme] and other humanitarian partners and also to access public services. With the certificate, they can get medical treatment in state-run hospitals and clinics in Jordan and also enroll their children in schools. Most police respect the document and are aware of it. Many officers even encourage the refugees to register as a form of protection. Then there are people who have registered and have the necessary documentation but need to renew it. This is because the registration certificate is only valid for six months. We also help these people by arranging a date for them to renew their registration, which can only be at our offices in Amman and Irbid.

Tell us about the challenges you face

Allocating interview times for people is one of them, but it gets easier the more time we spend in a given city and get to know the environment and the refugees. We normally give more than 200 appointments a day. If more come, we take down their names and prioritize them for the following week. If an urgent case comes along during the day, we would of course also give that person immediate priority.

We are often asked to fast-track applications, especially by Jordanians who are friends or relatives of the Syrian refugee applicants. We have to explain to them why this cannot be done and why they have to wait their turn. It puts a lot of pressure on us. Not everyone takes it well and we are used to aggression and emotions running high. Sometimes they insist, but when they see that we also stick to our position, they accept it.

Also, it's difficult having to deal with so many families, each with their own tough story. That affects you a lot. On the way back from work, we talk about the difficult cases we have seen. It is a way for us to let off steam and to share, because sometimes emotionally it is too much to keep it inside.

What else is different about being in emergency mode?

Every week we have an action plan, but so many new issues come up that we don't necessarily follow that plan. For example, if we hear about a group of urgent medical cases in Ramtha, we would go there instead of the town we were planning to visit. We know they need to be registered if they are to receive medical assistance. The unpredictability of our days has become so normal that even when I am scheduled to stay in the office for some days, I come in casual clothes because I almost always have to go out and visit refugees and host families.

Is there any refugee family that has particularly moved you?

Yes. One day, I was approached by a Syrian family who said that their 21-year-old son was very sick and that I had to go and visit him because he was unable to come to the registration room. When I reached their home, I was expecting to see a tall and fit young man. What I saw took my breath away and shocked me. He was lying on a mattress under a lot of blankets. He had become so emaciated that it was difficult to spot him under all the covering – he was just skin and bones.

The boy had been on the back of a motorbike, trying to escape the gunfire, when he was shot by a sniper. He fell off the bike and was badly concussed when his head hit the ground. His parents were too scared to take him to hospital and decided to treat him at home. They told me that in the first few weeks after the incident, he was drifting in and out of consciousness and they had to feed him through a tube. In the end they decided to take him to Jordan and he was carried to the border on the back of a Syrian man who was also fleeing.

UNHCR helped get the boy admitted to hospital, but it was too late. Four months later, he died. It was heartbreaking to see his suffering and that of his family. This is just one tragic tale, but we come across so many every day in our work.

Despite all the suffering you see, are you glad you joined UNHCR?

Yes, absolutely. I feel we have an important mandate. It is not just a job. I feel that through the work I do, I can help people. Before I joined, I used to read about UNHCR in the local newspapers – that it worked with refugees. That was back in the days of the Iraqi refugee crisis. Then one day I saw an ad in the newspaper saying they needed a staff member. I consulted a friend who was working there and she advised me to join. I have a law degree. I felt that it was what I was looking for.