TONGO Camp, Ethiopia, February 29 (UNHCR) – In a tent schoolroom near the top of a hill, the refugee children from Sudan sit shoulder-to-shoulder on wooden benches or on the dirt floor. The littlest ones make themselves at home in the front of the class so they can have a clear view of the blackboard. 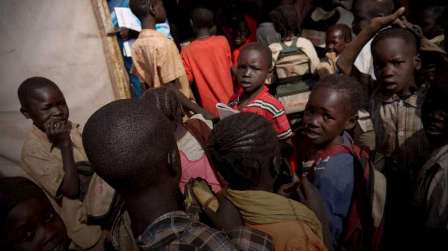 A crowd of students arrive at the school in the Tongo refugee camp in Ethiopia. The demand for education among the children, whose families have fled fighting in Sudan, is so great that new classrooms are being built. © UNHCR/G. Beals

For the next two and a half hours in classes that range between 150 to 200 students, pupils share precious school notebooks and study English, Arabic, social studies and math. The demand for education is so high and the supply so limited that the teachers decided to divide the student population into two shifts. Even then, the classrooms are overrun with students who race each other to see who could get into class first.

One of the many challenges the UN Refugee Agency (UNHCR) faces in dealing with those who have crossed the Sudan-Ethiopia border fleeing conflict involves providing for the educational needs of children and young adults. In Tongo camp alone, there are some 4,000 children between the ages of 5 and 17 – most are longing to go to school. Of those, approximately half are able to attend.

Since the beginning of September last year, clashes between the Sudanese army and rebels from Blue Nile state have prompted 50,000 civilians to flee their homes and more than 27,000 to cross into Ethiopia from Sudan.

When Togo Camp opened on October 5, 2011 refugees from Blue Nile State began to flood the camp. Education competed with the need to provide a full range of life sustaining services such as water and sanitation. When the agency opened up a makeshift primary school in Tongo in December, it was immediately inundated with students.

New classrooms that will accommodate as many as 800 more children will soon be under construction. Registration for the new facility has already begun and UNHCR is constructing latrines and laying the groundwork for water facilities for the students. By September, it is hoped that a permanent school structure will be established.

The large number of students and constant use of facilities is taking its toll. "Yesterday I brought a big needle and rope to sew together the walls of the tents," says Senait, a Community Services Officer with UNHCR.

When the schools opened, Ashimi often found chalk drawings of airplanes dropping bombs on villages, an event that has become all too common in Blue Nile State during the conflict. He noted that in a single classroom as many as 40 percent of the children had one parent missing and about 10 percent were missing both parents. "When a child goes to school it helps them to deal with the past," he said. "The longer they stay out of school doing nothing, the more they don't stop to remember about all that has happened to them."