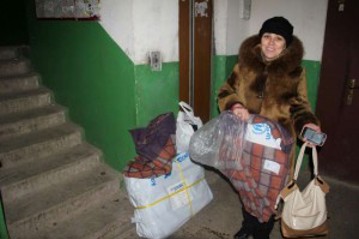 The UN refugee agency has reacted swiftly to help people forced to flee their homes when the southern Ukrainian town of Mariupol came under rocket fire at the weekend, providing plastic sheeting for shelter construction. UNHCR has been working in Ukraine over the past year.

UNHCR distributed on Saturday and Sunday enough sheeting to help more than 1,000 people whose homes were damaged or destroyed when the strategically important port town came under fire, killing at least 30 people and injuring dozens.

Construction materials are in short supply and the sheeting can be used to create a makeshift shelter and cover holes.

"We provided basic relief items to help the local authorities and victims of this shelling and now we are emptying our stockpiles of emergency supplies to cover the needs as soon as possible," said Oldrich Andrysek, UNHCR's regional representative.

Before handing out the sheeting with local municipal authorities and emergency services officials, UNHCR conducted a rapid damage and needs assessment of affected areas and identified many people with urgent needs, particularly older people, those living with disability, and female-headed households with large numbers of children.

Meanwhile, UNHCR is also distributing blankets, thermal clothing and sleeping bags to people lacking heating in their homes. Additionally, blankets, bed linen, towels and thermal clothes have been delivered to hospitals in Mariupol.

In the coming days, UNHCR plans to deliver roofing materials to families whose homes have been damaged in Mariupol as well as the villages of Sartana and Talakivka.

Fighting between the Ukrainian armed forces and anti-government combatants has left hundreds of thousands of people displaced. A ceasefire was agreed on in September, but the conflict has flared up again and has been intense in parts of the east in recent days.