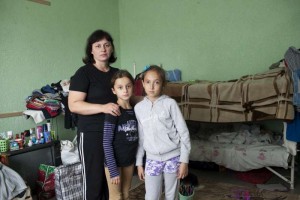 "We are planning to distribute additional winter clothes and blankets over the coming weeks, as well as providing 400,000 square metres of reinforced tarpaulin sheets for roof repairs in the east of Ukraine," Edwards said.

GENEVA, October 24 (UNHCR) – With the crisis in Ukraine entering its first winter, UNHCR is racing to help some of the most vulnerable displaced people cope with expected harsh winter conditions.

"Fighting in the east, and the resulting breakdown of basic services, continues to drive more people from their homes," UNHCR spokesman Adrian Edwards told journalists in Geneva. He added that the need for humanitarian aid was rising, particularly around the cities of Donetsk, Kharkiv and Kyiv, and in the Dnipropetrovsk and Zaporizhzia regions. Ukraine's internally displaced population is estimated at 430,000 people, some 170,000 more than at the start of September.

Some 95 per cent of the displaced are from eastern Ukraine and are concentrated in Donetsk, Kharkiv, Kyiv and other cities. In all of these areas, UNHCR has been distributing aid among the most vulnerable.

While the majority of the displaced people are staying in rented accommodation or with family and friends, at least 14,000 are currently living in collective centres. With the onset of winter, one of the urgent priorities is to make sure that these centres are weather-proofed and that warm blankets and winter clothes are being provided for those in greatest need. UNHCR plans to refurbish 40 collective centres in major arrival areas.

Edwards said that cash assistance programmes amounting to some US$250,000 had been established in cooperation with the local authorities to support highly vulnerable individuals, many of whom have not received pensions or welfare payments due to the conflict. So far, some 1,600 people in the Kyiv, Lviv and Vinnytsia regions have benefitted from this. The programme is being extended to six other parts of Ukraine.

In the past two weeks, Ukraine has taken important steps to protect and assist displaced people with new government resolutions on registration and assistance. Some 16,000 families have been registered in the last week. Edwards said UNHCR looked forward to the establishment of a central agency and full and timely registration of the displaced over the coming weeks.

Last Monday, the Ukrainian parliament adopted a law on the rights and freedoms of internally displaced people. The law, which was developed with support from UNHCR and civil society, extends a specific set of rights to internally displaced people, providing protection against discrimination, forcible return and assistance in any voluntary returns. The law also simplifies access to different social and economic services.

"UNHCR hopes that rapid implementation of this legislation will help displaced people in finding safe shelter, jobs and proper access to services. The law obliges the government to start developing a policy on integration of internally displaced people, which is expected to lead to better planning for those in need," Edwards said.

Meanwhile, in the Russian Federation, more than 207,000 Ukrainians have applied for refugee status or temporary asylum since the beginning of this year, according to the Federal Migration Service. In addition, some 180,000 Ukrainians have applied for other forms of legal stay in Russia, such as temporary or permanent residence permits. A larger number of Ukrainians are arriving in Russia under the visa-free regime between the two countries.

Most Ukrainians arriving in Russia stay with relatives, friends or find private accommodation either rented or with a host family. The Russian authorities have adopted several regulations to facilitate the temporary stay of Ukrainians arriving in their territory and UNHCR hopes equal treatment will be afforded to refugees from other countries too.

As of the end of September, more than 6,600 Ukrainians had requested asylum in European Union (EU) countries, compared with 903 applications during the whole of 2013. The EU country receiving the largest number of Ukrainian asylum seekers has been Poland (1,632), followed by Sweden (841). In addition, 581 Ukrainians have sought asylum this year in Belarus.