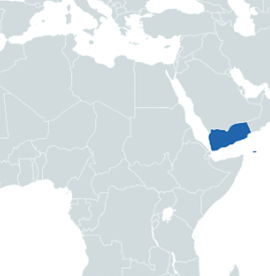 After seven years of war, Yemen remains the world’s worst humanitarian crisis. Nearly 6 million people have been uprooted from their homes and more than 23.4 million are in dire need of humanitarian assistance. The risk of a large-scale famine in the country has never been more acute. Tens of thousands are already living in famine-like conditions, with a staggering five million more just one step away from it.

1. When did the crisis in Yemen begin?

2. Where are Yemenis fleeing to?

3. What are some of the biggest challenges facing people in Yemen?

4. How are Yemeni women and children being impacted by the conflict?

5. What is the UN Refugee Agency doing to help in Yemen?

When did the crisis in Yemen begin?

Yemen’s civil war began in 2015 as a result of clashes between Yemeni government forces and the Houthis - also known as Ansar Allah. Over the past seven years, conflict and economic decline have taken a heavy toll on civilians, forcing millions to flee their homes and leaving 73 percent of the population in dire need of humanitarian assistance. Even before the current crisis, Yemen was the most vulnerable country in the Middle East. It ranked among the world’s worst in malnutrition rates and half of its population was living in poverty, without access to safe water.

Where are Yemenis fleeing to?

Many of the internally displaced have been living in exile for years, straining their meager resources and facing increasingly harsh conditions. Many IDPs in Yemen live in dangerous locations, characterized by widespread food insecurity and lack of water, healthcare and sanitation services. Their situation became even more challenging with the onset of the COVID-19 pandemic and the threat of a looming famine in the country.

Despite the conflict, Yemen hosts more than 97,000 refugees and asylum seekers, primarily from Somalia and Ethiopia, making it the world’s third largest host of Somali refugees.

What are some of the biggest challenges people face in Yemen?

The risk of a large-scale famine, violence, collapsing services and protracted displacement are the biggest challenges in Yemen. Seven years of intense fighting have pushed the country to the brink of economic collapse, severely compounding needs that were already high due to years of poverty and insecurity. 23.4 million people in Yemen are now in need of humanitarian assistance.

The current level of hunger in Yemen is unprecedented. Despite ongoing humanitarian assistance, 17.4 million Yemenis are food insecure, and the number of food insecure people is projected to go up to 19 million by December 2022.

And the COVID-19 pandemic has made things worse – with people’s immune systems already severely weakened after years of war and deprivation, Yemenis continue to grapple with the effects of the virus and outbreaks of other preventable diseases – such as cholera, diphtheria, measles, and dengue fever – that were long-ago eradicated elsewhere in the world.

How are Yemeni women and children being impacted by the conflict?

Women and children are bearing the brunt of the crisis. They constitute 79 percent of the internally displaced population and are finding themselves in increasingly difficult circumstances.

As of March 2021, one in four displaced Yemeni families was headed by a woman or girl —  20 percent of whom were under the age of 18. Women and girls are forced to take on the responsibility to sustain their families while facing inequality, limited access to services and multiple barriers due to entrenched sociocultural norms. With rampant inflation and few livelihood opportunities, many can no longer afford basic meals and are facing heightened risks of starvation, gender-based violence, exploitation and early marriage. Malnutrition rates among women and children in Yemen remain among the highest in the world, with 1.3 million pregnant or breastfeeding women requiring treatment for acute malnutrition.

Meanwhile, Yemeni children continue to be killed and injured because of the conflict and are dying at increasingly high rates due to preventable diseases and malnutrition. Today, 2.2 million children under the age of 5 in Yemen require treatment for acute malnutrition.

What is the UN Refugee Agency doing to help in Yemen?

UNHCR, the UN Refugee Agency, provides lifesaving aid to displaced Yemenis, as well as to refugees and asylum-seekers across the country, reaching people in need in all 20 governorates affected by the conflict. UNHCR provides shelter kits, mats and plastic sheets to help families repair homes that have been damaged in the conflict and supports health facilities that serve refugees, asylum-seekers and Yemenis affected by violence. Health priorities include preventing and controlling the spread of cholera and helping protect families against COVID-19 by distributing hygiene kits and providing safety information across the country.

UNHCR also provides cash assistance for displaced people to cover their most urgent needs such as food and medicine, emergency shelter, and core relief items such as mattresses, blankets, sleeping mats, kitchen sets, solar lamps and more to help those displaced and most vulnerable.

UNHCR provides legal assistance and psycho-social support  to help those affected by the war, along with a wide range of protection services such as prevention of gender-based violence and specific interventions focusing on women and children.