TYRE, Lebanon – During close to six years she has spent as a refugee in Lebanon, Tharwat, 38, has faced a constant struggle to meet competing needs such as putting food on the table and buying medication for her ill mother.

But since her inclusion by UNHCR, the UN Refugee Agency, in its programme replacing aid in kind with a monthly disbursement of cash, Tharwat has regained control over her finances and a corresponding boost to her dignity.

“The money I receive has changed my life,” said Tharwat, who has devoted herself to caring for her sick mother. “I now have the freedom to buy what I need the most, and that’s my mother’s medication. She would fall very ill without it. For me, food comes second.”

“The money I receive has changed my life. I now have the freedom to buy what I need the most.”

Tharwat is among some 1.8 million forcibly displaced people across the Middle East who this year received cash-based aid, part of an important shift in how the world’s refugee situations are increasingly being managed.

Traditionally, aid has been delivered mainly through in-kind support. But with some 80 per cent of the world’s displaced people living in cities, and often with either only limited or no access to legal employment, cash aid is now being used to target help those most in need. Recipients receive cash through cards or ATMs. The direct cash aid reduces costs and also empowers refugees like Tharwat by giving them the choice over how to meet their most immediate needs.

“We used to queue for hours to get blankets or hygiene items. Those were items that we really needed, but now we can decide what to buy and when to buy it,” said Tharwat, who is among 30,000 economically vulnerable refugee families in Lebanon who benefit from the monthly disbursement of US$175. 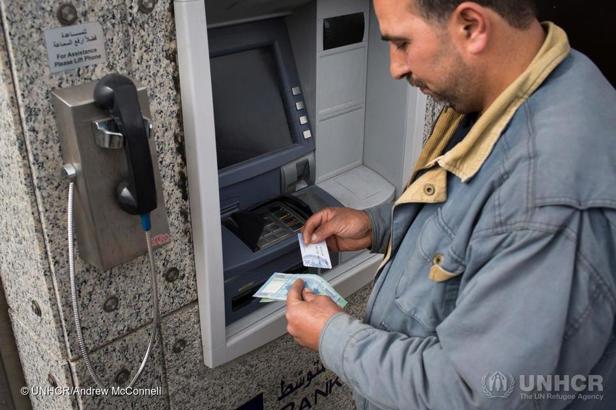 More than 800,000 refugees in Lebanon are also currently benefiting from additional monthly cash during the winter months, from November through March.

As well as helping refugees, the program is also providing a welcome fillip to local businesses in Lebanon, which hosts over one million Syrian refugees - the largest per capita concentration worldwide, equivalent to one in four of the population.

“The cards the refugees get have transformed them from passive recipients of assistance to active consumers. They are really greasing the wheels of our economy in the Bekaa Valley,” said Mohammad Taha, the owner of a gas station in Jeb Jennine, a town in West Bekaa where some 8,000 registered refugees live.

“Refugees are really greasing the wheels of our economy in the Bekaa Valley.”

“The sale of fuel to refugees for heating during the winter has increased my revenues by almost 10 per cent,” he added.

“At the outset of the program, refugees used to struggle with the card and have basic questions about the pin code and how to go about managing their resources,” she said. “But since then, we’ve managed to improve their banking skills.”

Salaam explained that many refugees have now learned to stagger their spending and only withdraw small amounts at a time.

“The world has rapidly moved to electronic transfers and payments, and now the refugees are completely up to speed with that, and they are funneling the cash they receive back into the local economy.” Salaam added.