Ethiopian refugees in the Tigray region persevere despite adversity

It has been almost two months since conflict broke out in Ethiopia’s Tigray region. Over 50,000 people have already crossed the border, walking long distances over harsh terrain in order to reach safety in Sudan. These are fathers, mothers, doctors, teachers, people like you and me, who have left behind their homes and everything they once knew just to save their lives.

These are some of their stories: 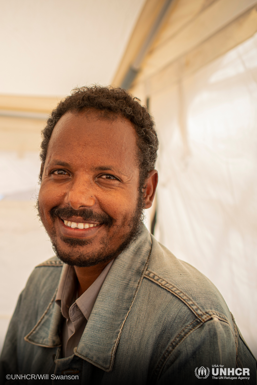 Dr. Daryelowm was having a busy day at the hospital where he worked when violence arrived at his door. In the blink of an eye, he was forced to flee with thousands of others, escaping the conflict and crossing the border into Sudan.

“We heard there were civilians who had been wounded by the bombings,” he recalls. “People were leaving without anything, just rushing away to save their own lives.”

After reaching the Sudanese settlement near the border, Dr. Daryelowm returned to work. He pulled together a group of doctors, nurses, pharmacists and even a veterinarian to help his fellow refugees who were falling sick from illnesses, such as malaria, pneumonia and typhoid. And although he is working with limited resources, Dr. Daryelowm is not ready to give up.

“We have to fight to the end. We can’t give quality care here but we can give something, some basic care to the people who are here,” he says. 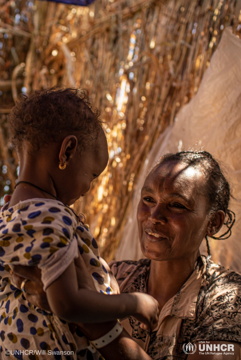 A light sheet covers part of Ngesti’s shelter at Um Rakuba refugee camp to protect the family from the harsh sun. Inside the shelter, she is getting prepared to start one of the two classes she teaches in Tigrinya - her native language - to help children at the camp.

"These children are the next generation coming up. Some will be doctors, teachers, pilots. I don't just dream for them … teaching plays a role in building a generation,” she shares.

Like many others, Ngesti was uprooted from her home when conflict arrived to Ethiopia’s Tigray region. Her house was attacked and burned to ashes, forcing her family to leave everything behind. Now at the camp, she is grateful for the hospitality of the Sudanese government and has offered to volunteer as a teacher.

“To build a generation through teaching is a great role. I’m proud because I can shape the future generation.”

Meseri was working at a juice bar in her hometown in Humera, Ethiopia, when fighting broke out. She saw people running while she was working, but it wasn’t until someone told her that armed people were coming to kill them that she fled for her life. She didn’t have time to return home and left with nothing - no food, no bags, no clothing. Two weeks later, she arrived at Um Rakuba refugee camp in Sudan, where she is sharing a shelter with other 50 refugees - many of whom have become their friends -  and wearing the same clothes that she had when she left Ethiopia.

“My hometown was peaceful. I worked at a juice bar, we served orange, lemon, and watermelon juice. I didn't see anything, but I heard that people were being killed. Especially young people," she shares.

Like thousands of people at the Sudanese border, Meserei became separated from her family during her flight. She is worried about them. She doesn’t know where they are, but she still has hope that things will get better and she will return home to reunite with them.

By becoming USA for UNHCR’s newest monthly donor you can help us rush critical emergency aid - including food, water, sanitation, health, shelter- and family reunification services to thousands of Ethiopian refugees who have left everything behind. Your gift could save their lives today.