If you’ve ever had a pet of your own, you know the love and comfort an animal adds to your life. The same is true for refugees and displaced people. During especially difficult times, pets bring refugees stability and a sense of peace.

That’s why these six refugees have stuck with their beloved dogs, cats, birds, horses and even cows through it all—carrying them across borders and holding them close as they begin to rebuild. 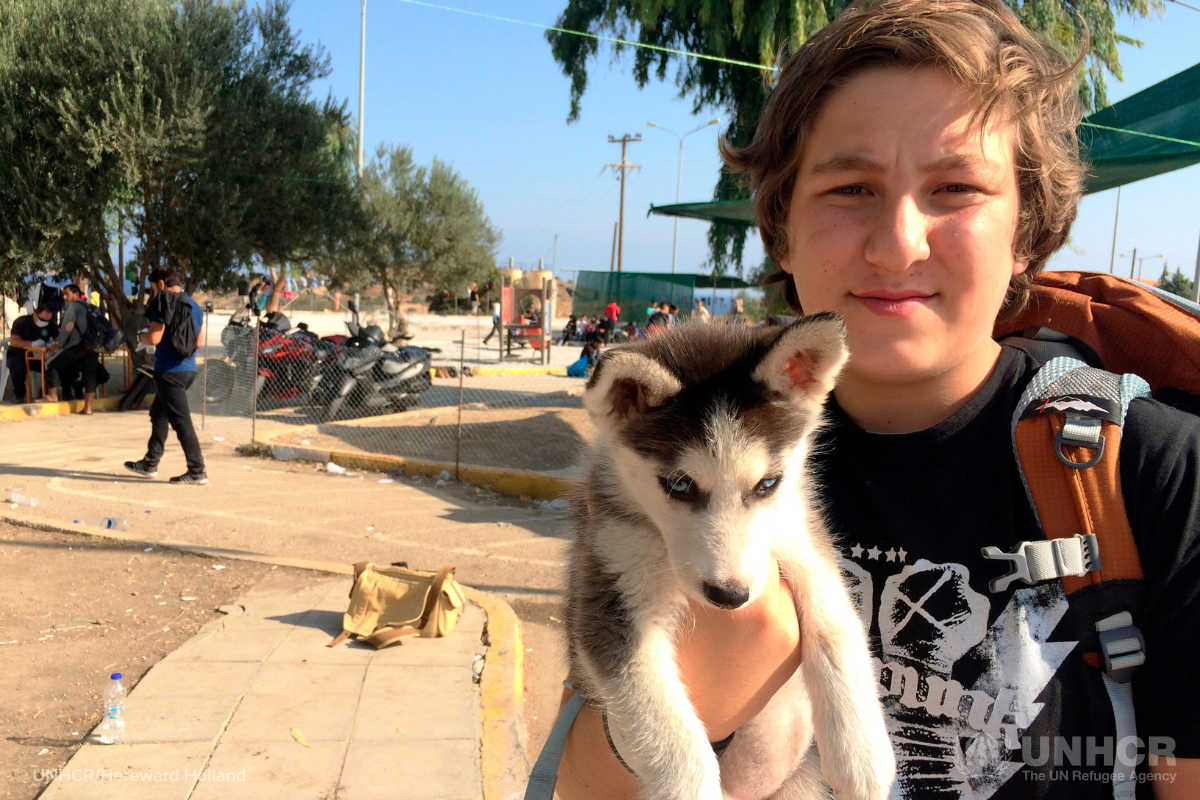 Aslan, originally from Damascus, Syria, walked over 300 miles across Turkey with his dog, Rose, to flee violence in his home country. “I love my dog. I take the dog everywhere. I took the dog because it is a small and lovely animal,” says Aslan. Aslan has even gone so far as to have official documents drawn up for Rose to ensure she can travel with him anywhere he goes. “The dog has a passport,” he says, showing off Rose’s paperwork. This way, despite leaving his family behind, Aslan will never be alone. 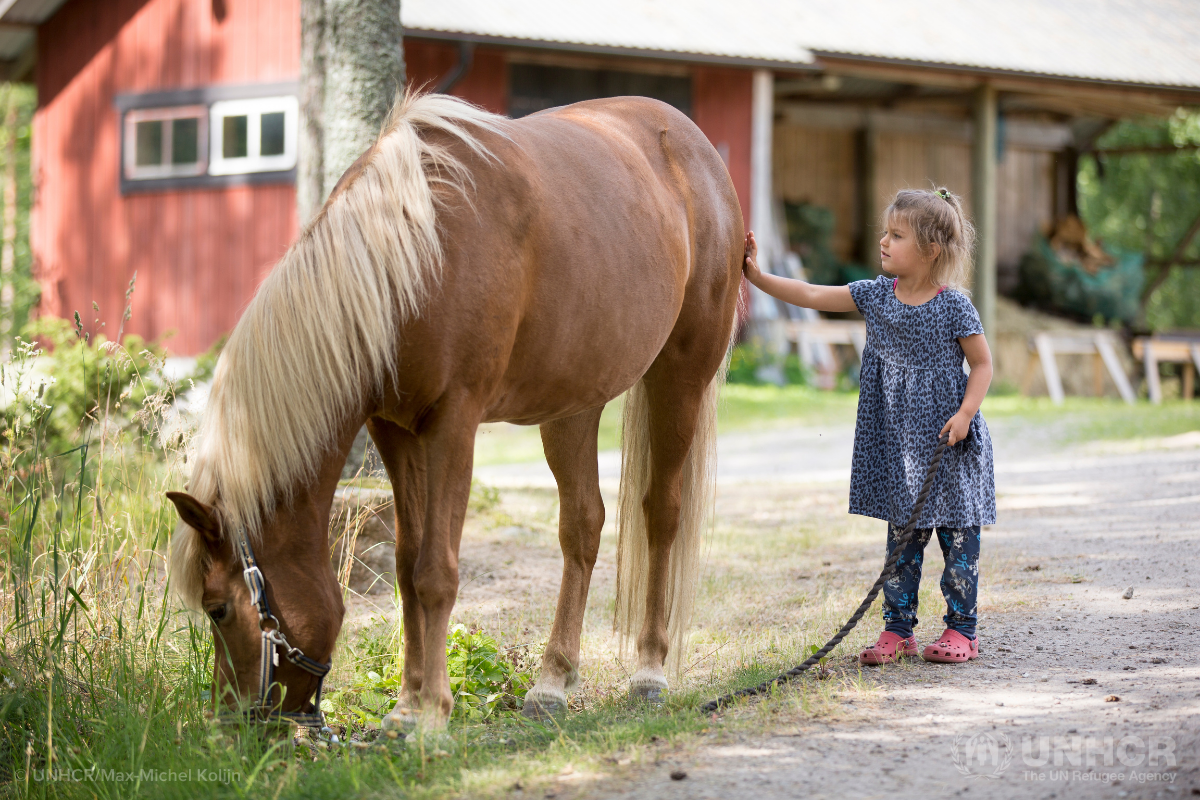 The small town of Nagu, Finland has opened its doors to more than a hundred refugees. The refugees have been warmly welcomed and the community has developed close relationships. Three-year-old Iraqi refugee, Diana, for example has become very close with her adoptive Finnish grandmother, Mona, and her therapy horse, Emma. Diana meets with Emma regularly for animal therapy, which helps her cope with the loss of her mother. 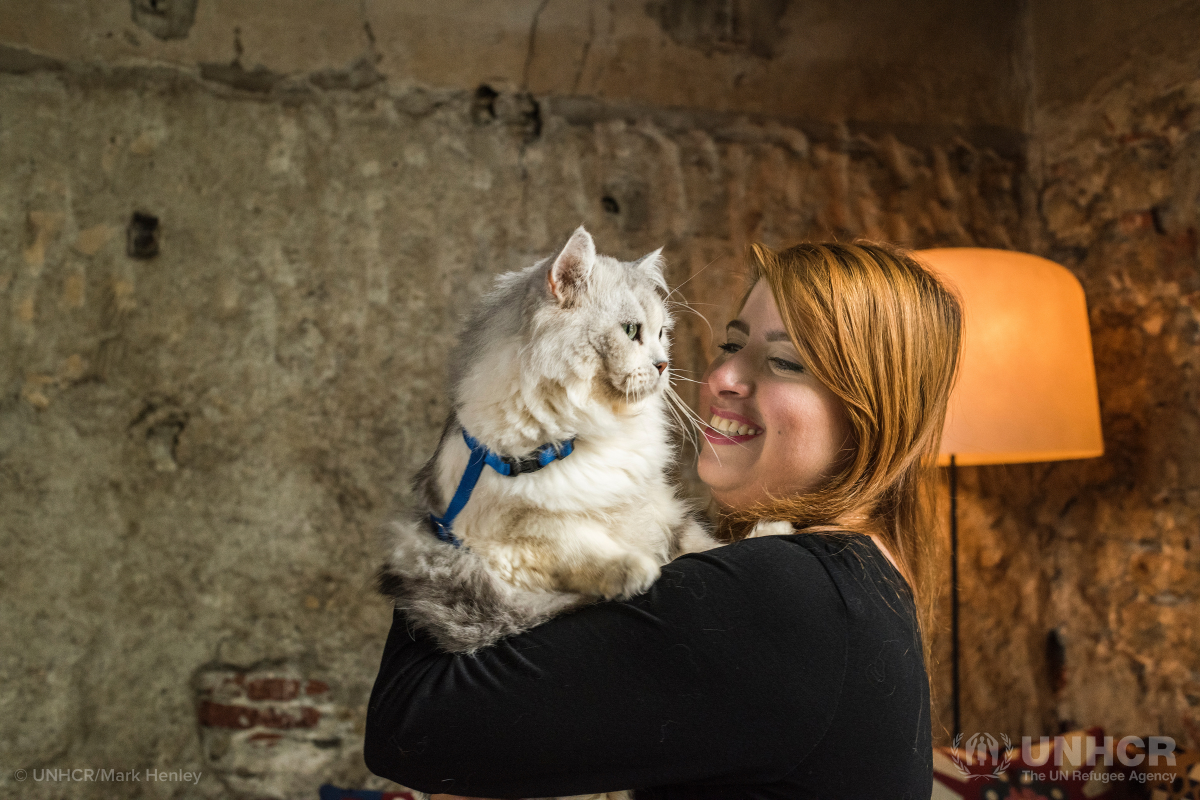 When violence erupts, refugees are often forced to flee, leaving their entire lives behind. Many bring just one possession–the most important thing they own. For Darin, that one special thing is her cat Caesar. Given to her by her brother seven years ago when the family was hiding from bombs in a cellar in Damascus, Syria, Caesar is now a part of the family. For Darin—who suffers from chronic polyarthritis, a painful joint inflammation—Caesar is both a source of comfort and therapy. “Caesar brings the house to life,” says Darin, who has begun to rebuild in Switzerland. 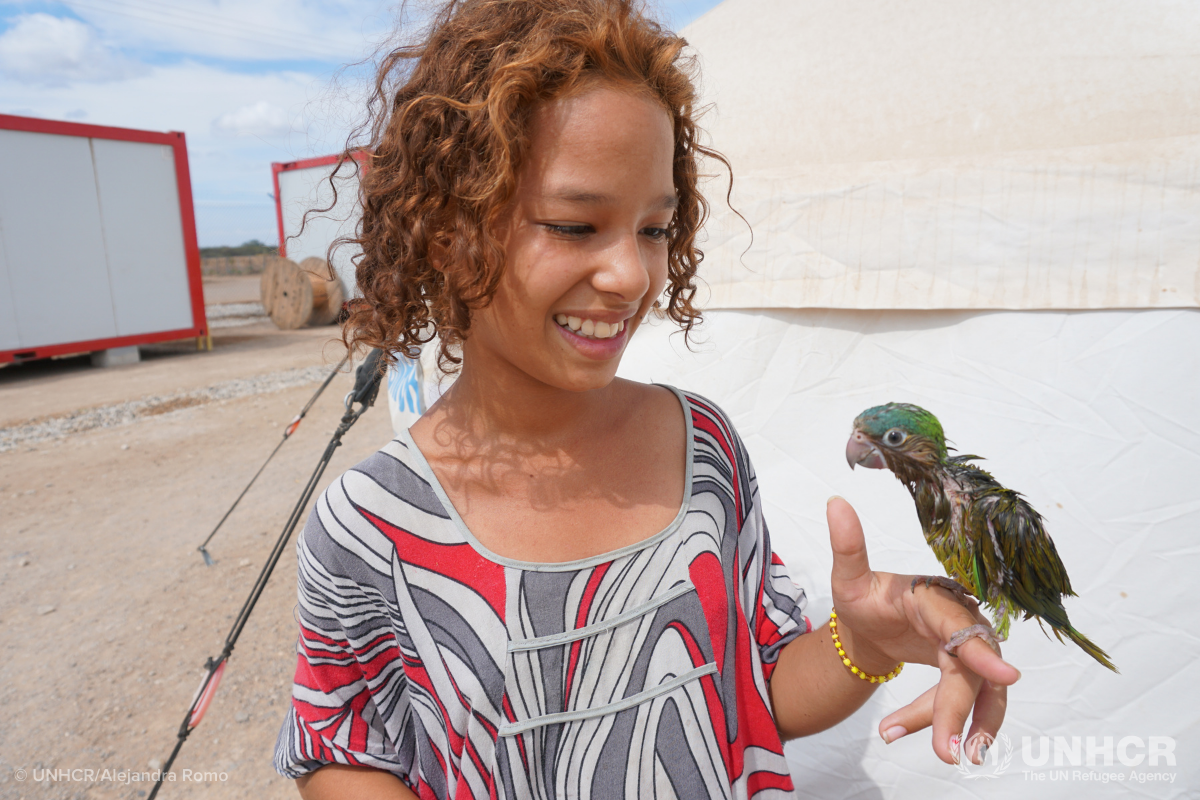 Egliana and her mother found a baby parrot a few days after leaving Venezuela for Colombia. The parrot was missing some feathers so she and her mother, who is a veterinarian, decided to adopt her and nurse her back to health. Egliana named her Felicia. “Felicia makes me happy, that’s why I chose that name for her,” she says. When she grows up, Egliana wants to be a veterinarian just like her mother. 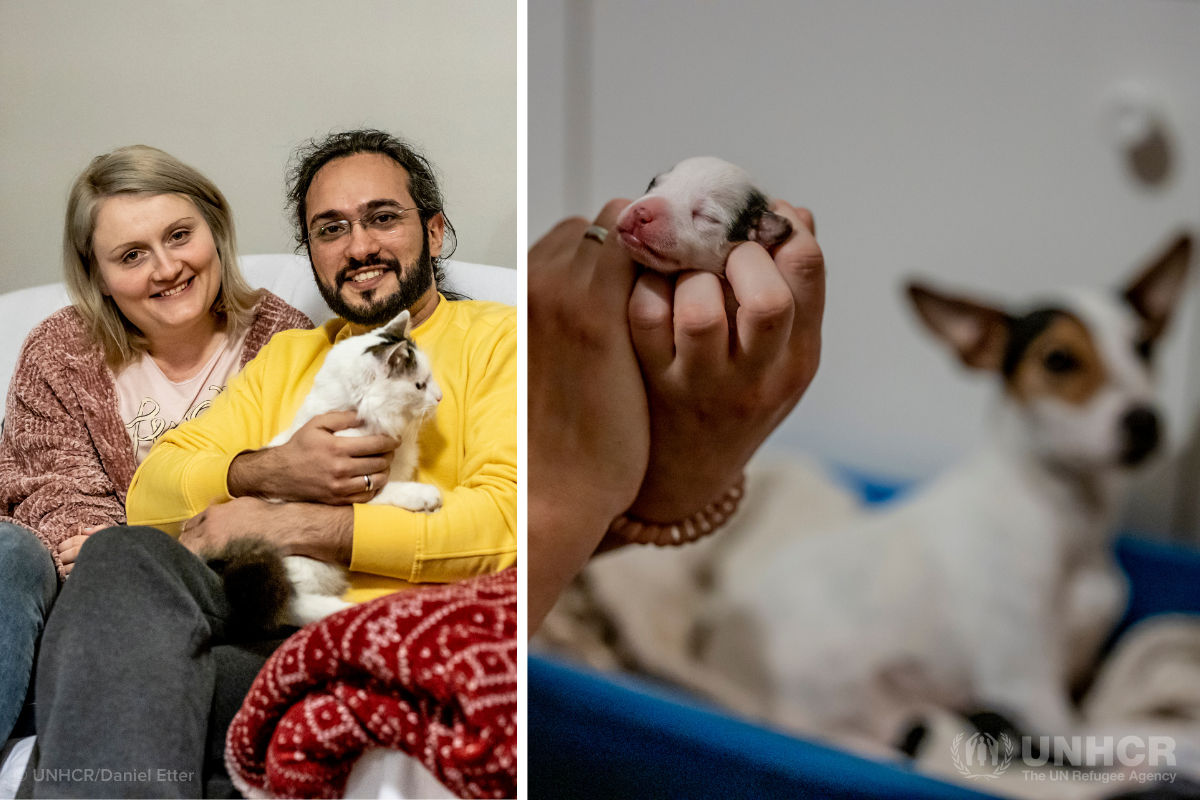 “For a cat, moving is very simple. You get the papers and that’s it. For a human, it’s more complicated,” says Mawaheb, a Syrian refugee who fled Aleppo in 2012. He speaks from experience; the Syrian computer programmer brought his cat, Fidel, with him as he fled from Syria to Turkey and from Turkey to Serbia. Today, he lives safely in Serbia with Fidel, his wife, Ida, and her dog, Lulu. Ida's dog Lulu has just had a litter of six puppies. “Fidel sensed that Lulu was having the puppies and became respectful and protective,” says Mawaheb, beaming with pride for his wonderful family. 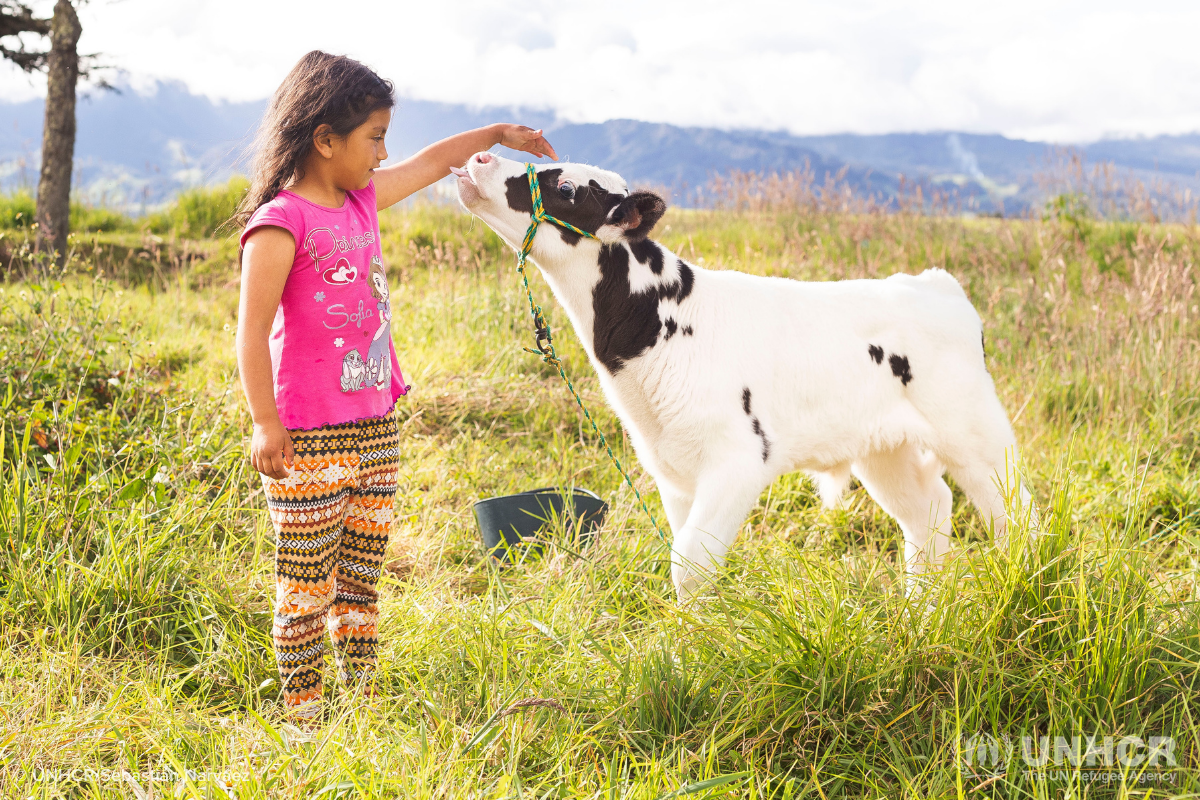 "When I grow up, I want to be a vet," says Heyleen, a Colombian refugee who lives with her parents in a rural community in Ecuador. Though she does not have any pets of her own, Heyleen loves going out and playing with the local animals. They bring her comfort and joy during lockdown, when resources are scarce and human interaction is even scarcer.

Though pets are an amazing form of comfort for refugees, they are not the only comfort they need to survive. After leaving everything behind, refugees need help accessing everyday comforts like food, shelter and opportunities for work. You can help empower refugees with these vital resources by becoming USA for UNHCR newest monthly donor today.