For a family of four, the Alkaridis claim a surprising number of countries of origin. Alaa and Lujein were born in Syria, they delivered their four-year-old daughter Leen in Egypt, and their one-year-old daughter Ritta was born in the United States. Alaa laughs when he recounts this fact, but conversation quickly makes clear that his family’s varied birth locations speak to a long and challenging journey from home in a war zone to resettlement on the other side of the world.

Here in Vancouver, Washington, life looks bright. The sun shines through the Alkaridis’ apartment windows as Leen builds with magnetic blocks and her baby sister, Ritta, tries her hand at playing the recorder. Their mother, Lujein, muses that she feels at home in Vancouver because the weather is similar to her home country. “Here we have the four seasons—the same as my [home country of Syria.] I also feel like I belong to Vancouver because I started moving around without the need for a GPS. So, I feel like, ‘yes, this is my place.'”

But Lujein and Alaa did not always call this country home; home for them used to be 7,000 miles away in Syria. Alaa was raised in Syria’s capital city of Damascus, while Lujein grew up in the southern Syrian city of As-Suwayda. Friends from childhood, each was raised in a family much like those found in their new hometown: multi-child households with two working parents who were dedicated to their children’s futures and education. 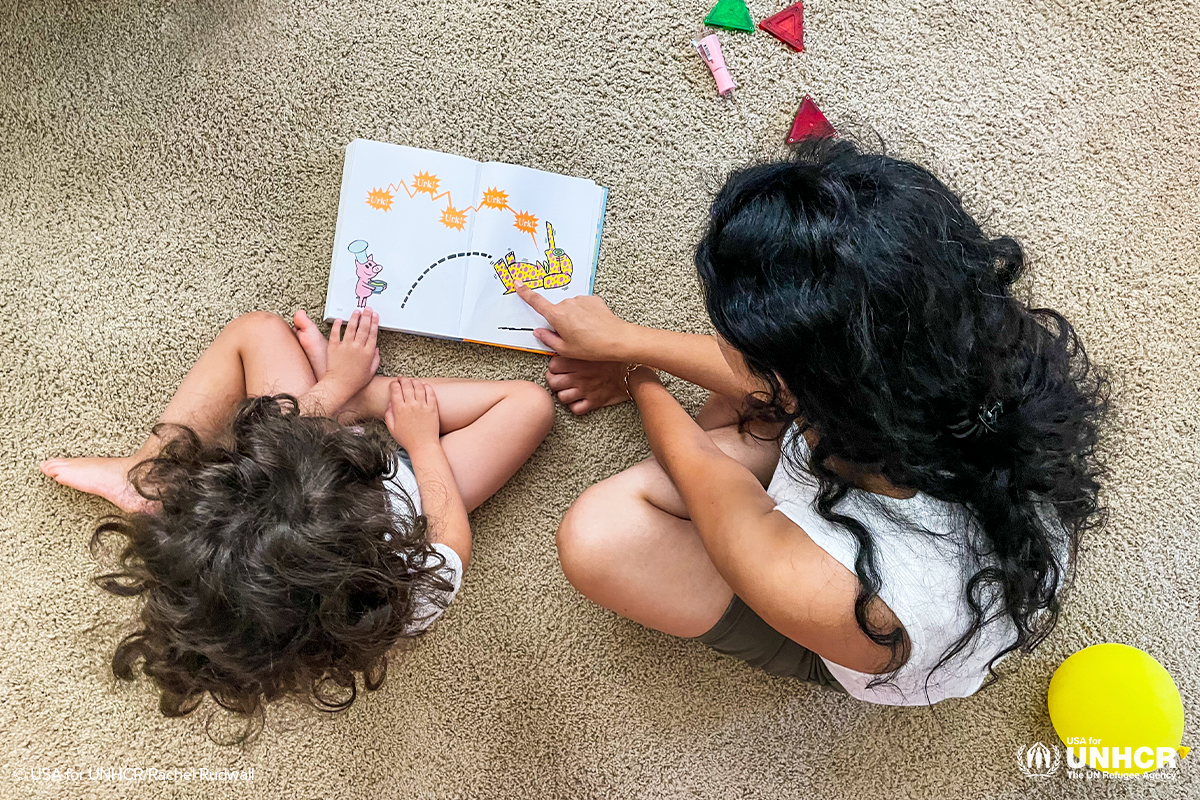 Lujein pursued an advanced degree in English literature, encouraged by a father who believed that women should have the same opportunities as their male counterparts, while Alaa studied engineering. In late 2009, as the two pursued their studies in Damascus, Alaa and Lujein’s childhood friendship bloomed into a relationship. Not long after, Syria’s civil war began.

As the conflict in Syria intensified in 2011, Alaa realized that he might be conscripted to fight in a war he didn’t believe in: “To serve with the army means I will die or will have to kill someone else from Syria. I’m against that totally, 100 percent, so I found I have to leave my country. I have to leave my family. I have to leave everything behind.” He fled Syria in 2012, joining the more than 13 million Syrians who are now displaced both inside the country and across the world as a result of the Syrian civil war.

His fiancée Lujein was soon to follow. The couple reunited in Egypt in 2014, where they said their marriage vows and hoped for resettlement to a third country where they could build a safe and stable life together. In 2019, Alaa and Lujein finally got the green light to head to the United States. 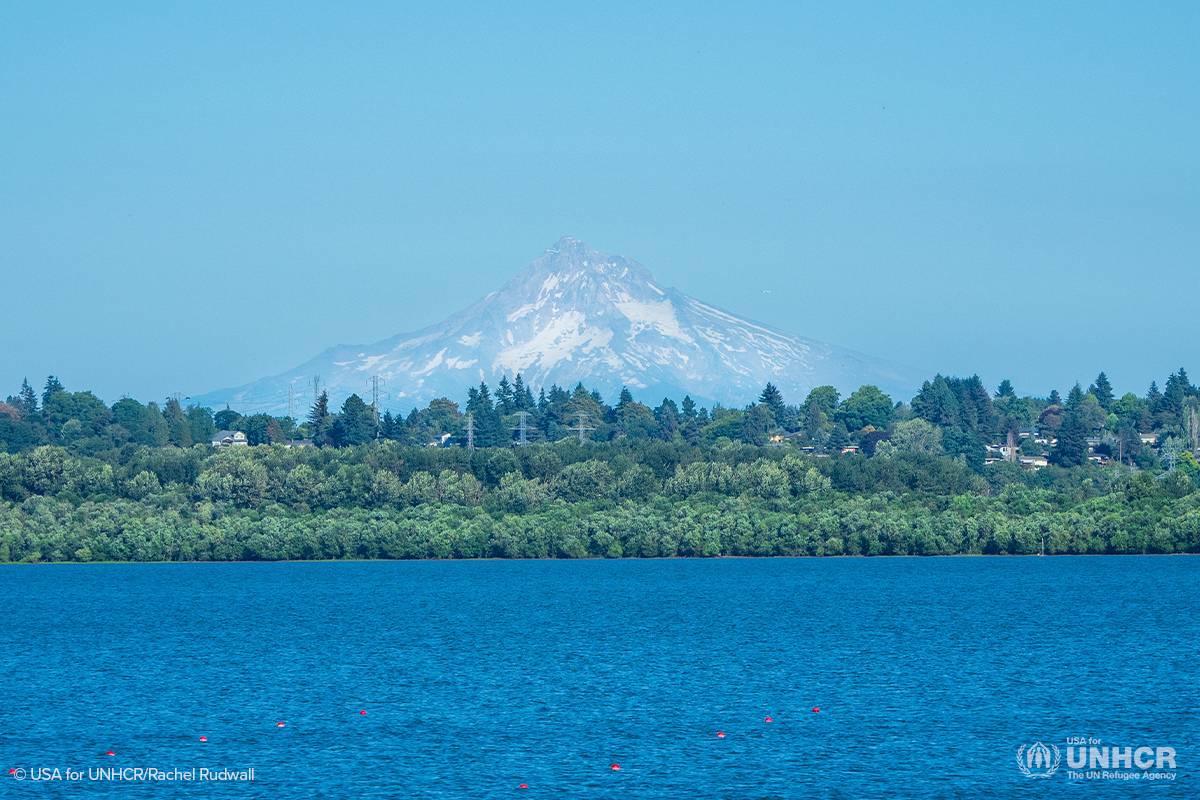 From the moment they arrived in the summer of 2019, the couple hit the ground running, arranging their own housing, financials and work applications. Within two months of arriving in Vancouver, both had secured jobs and begun to build new lives for themselves and their growing family.

Now, Alaa works with Catholic Charities of Oregon, supporting refugees through the complex process of resettlement. Lujein is employed as a Peer Support Specialist with Lutheran Community Services, acting as a mentor to resettled refugees as they face mental or emotional challenges in their new homes. Having navigated the complex U.S. resettlement process themselves, each feels compelled to pay it forward by assisting others with crucial tasks like learning English, finding jobs, setting up homes and navigating the public transit system.

As they continue to build a life in Washington, Alaa and Lujein marvel at their blessings in the United States, including access to jobs, clean streets and parks, accessible health care, a comfortable home, and most of all, the opportunity to provide a safe and stable future for their daughters. 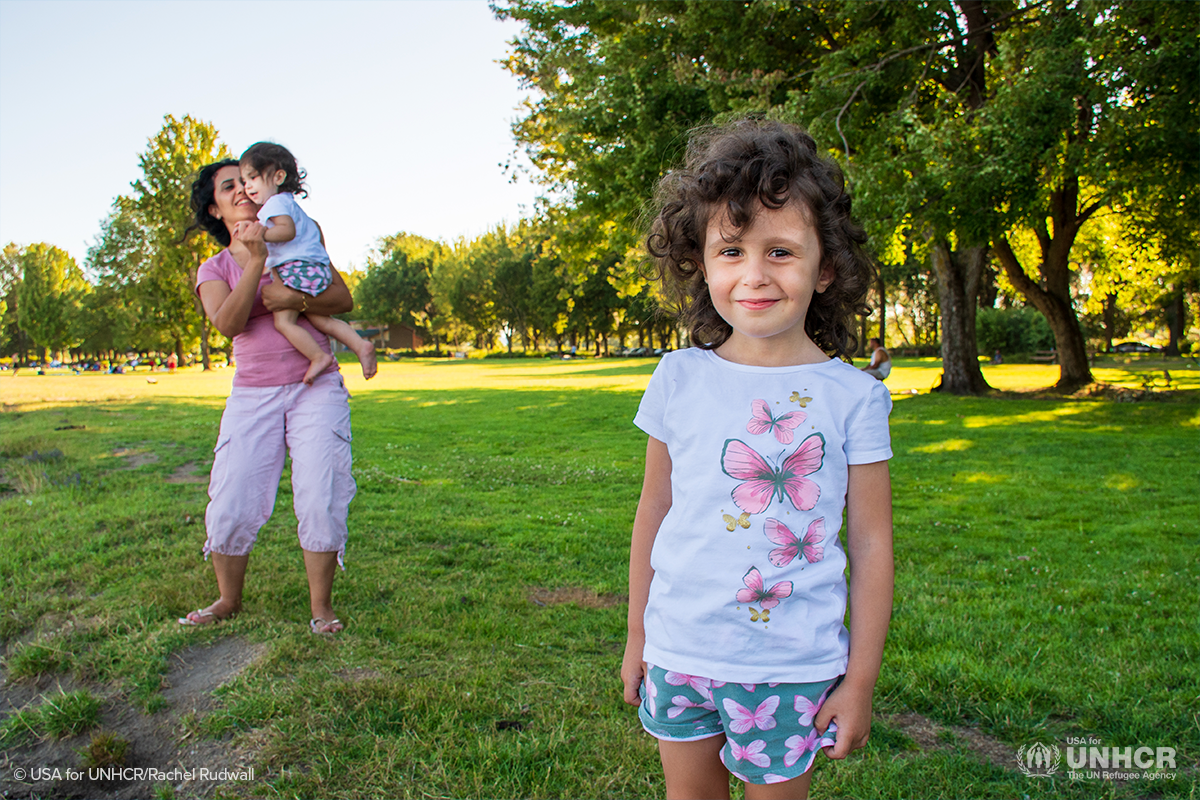 And with that, his daughter’s recorder starts up again in the background, and a smile spreads across Alaa’s face. “Okay – who’s ready for the park?”

Squealing with delight through the living room, Leen and Ritta prepare for an afternoon outing, and the future in their new home country looks bright.

EMMY-nominated producer, global explorer and USA for UNHCR Refugee Champion Rachel Rudwall spent time with the Alkaridi family during the summer of 2021 to help provide a platform for the story of their journey as refugees from Syria to the United States. Rachel has been working with USA for UNHCR since 2020 to bring attention to the refugee crisis and the individual stories behind the 82.4 million people who have been forced to flee.