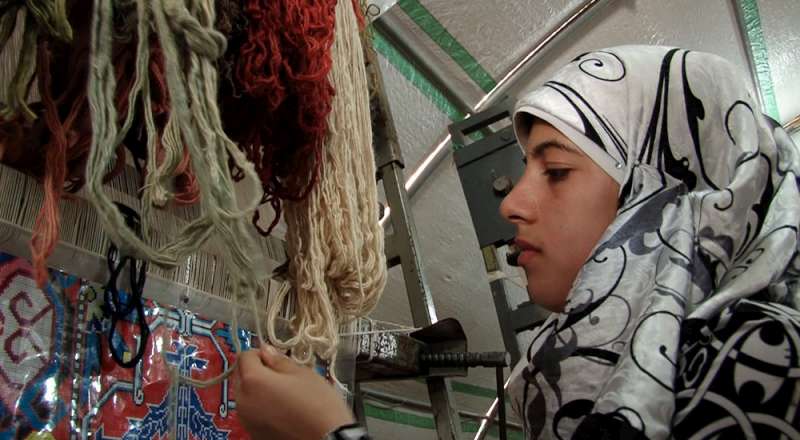 A young refugee woman practices her new skill of carpet making on a loom at the Adiyaman camp in Turkey.© UNHCR

A few women, no more than 40 in southern Turkey's Adiyaman refugee camp, lead a different life; a life first of learning, then of work. A large tent in the center of the camp of 10,000 refugees has become a carpet-making workshop.

The project was set up by the camp management with help and money from the local municipality, which supplied looms and other equipment. Under the guidance of a Turkish teacher, the women learn the techniques of traditional carpet-making and then, within weeks, start making their own.

"Women want to work here in order not to think about Syria all the time, and about the tragic times they've faced back home," says Rula Qasim, who fled the fighting in her country more than a year ago. For months she brooded over the country and the memories she had left behind, until her mother urged her to join the workshop.

"This [work] helps us forget trauma, like losing relatives, or to stop thinking all the time about the children still in Syria. This course can offer relief," she explains.

More than relief is on offer. Warda Beitun is just 15 years old, but she's been in the workshop for almost a year and has finished two carpets. The materials are supplied by Turkish companies which take the finished carpets and sell them, in Turkey and overseas. Both Warda's carpets were sold and she was paid a percentage of the sale price.

The carpets follow traditional designs and that, Warda says, is tricky. "The most difficult part of this job is to match the motifs exactly. There are big parts of this profession that are hard to learn, it's not easy. Like placing the thread in the exact position, you must learn that. It's challenging."

The Turkish handicrafts tutor, Gamze Karayilan, doesn't try to hide the fact she and her colleagues see the job as more than teaching carpet weaving. They are not afraid to suggest to the Syrian women that the work might empower them.

"They have certain traditions," Gamze says. "From a man's point of view, the main aim for women is to have children. At the beginning we even criticized this, but that's their tradition. Here in the camp men dominate life, they look at women differently. This is a minor effort, but at least we are trying to change the culture."

The carpet workshop has recently been followed by another pilot project, sewing and tailoring for men. For the moment just 15 men are learning a new trade.

Outside, in the sandy streets of tented suburbia, boredom rules. Unlike urban refugees, they are not free to move outside the camp and therefore cannot find work during the cotton harvest. And so thousands sit, or stand and wait. There is, for them, little else to do.