UNHCR’s Bathoul Ahmed describes some of the horrors she has witnessed while working in war-torn Yemen. 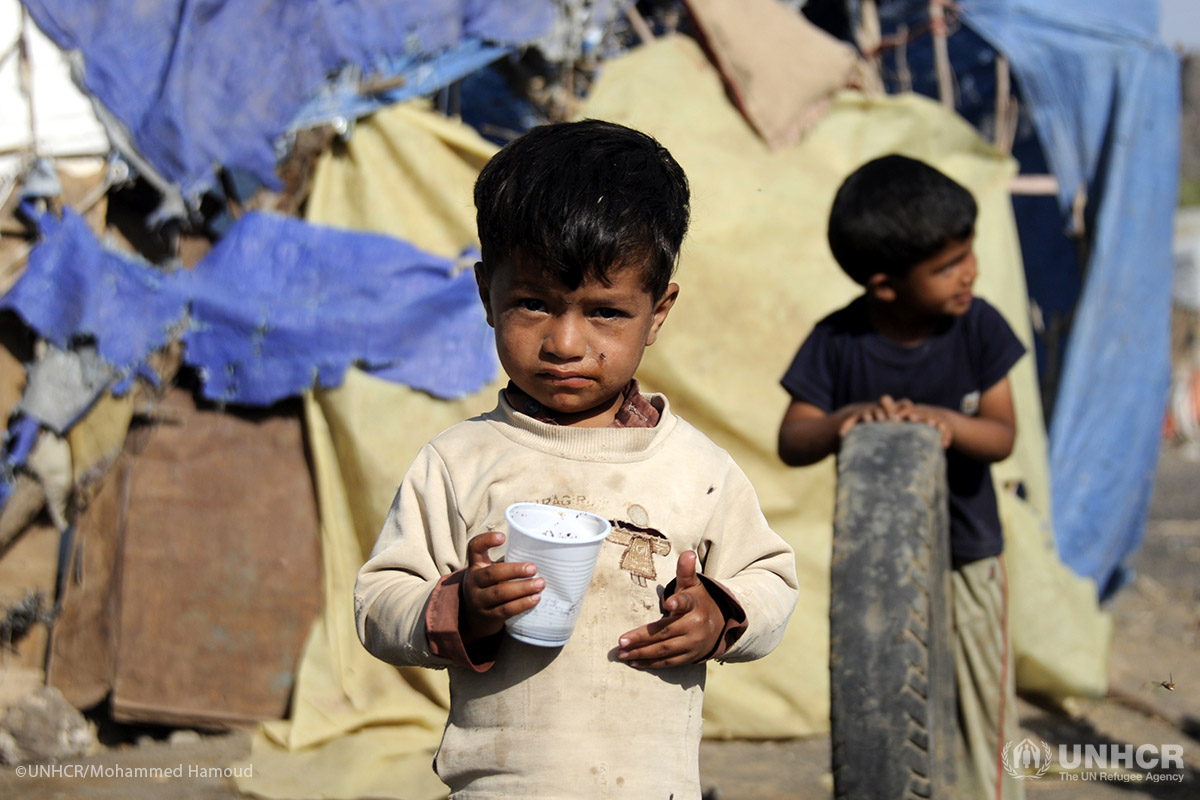 I have worked on several humanitarian emergencies in the Middle East, and have followed news of the conflict in Yemen for years. But nothing I’d read or experienced could have prepared me for the scale of human suffering that awaited me when I came here three months ago.

Before I arrived, I knew that 20 million people across the country were food insecure, including nearly 10 million who are suffering from extreme levels of hunger.

But it was only once I had heard the cries of a severely malnourished eight-month-old baby girl, seen the desperation in her mother’s eyes, or listened as a teenage boy described the landmine explosion that killed his best friend, that the full horror of these statistics hit home.

The UN estimates that 7.4 million Yemenis need help to treat or prevent malnutrition, including 4.4 million in acute need, and has verified that more than 6,700 children have been killed or maimed since the start of the conflict.

As a communications officer for UNHCR, the UN Refugee Agency, based in the southern port city of Aden, part of my job is to try to help the outside world understand what is happening to Yemen and its proud people by sharing some of what I’ve witnessed and heard.

One of the first things that struck me was the country’s staggering beauty. Endless stretches of pristine coastline and white sand beaches, backed by towering mountain ranges. Pomegranates swollen with ruby-coloured juice, seafood to match anything on earth, and rivers of honey in every shade of gold.

Set against this incredible natural background are shocking levels of poverty and destitution. The evidence of nearly four years of fierce fighting is everywhere you look. As you drive through Aden, you see that not a single building is left unmarked by shell damage or bullet holes, and almost every adult male carries an automatic rifle over his shoulder. 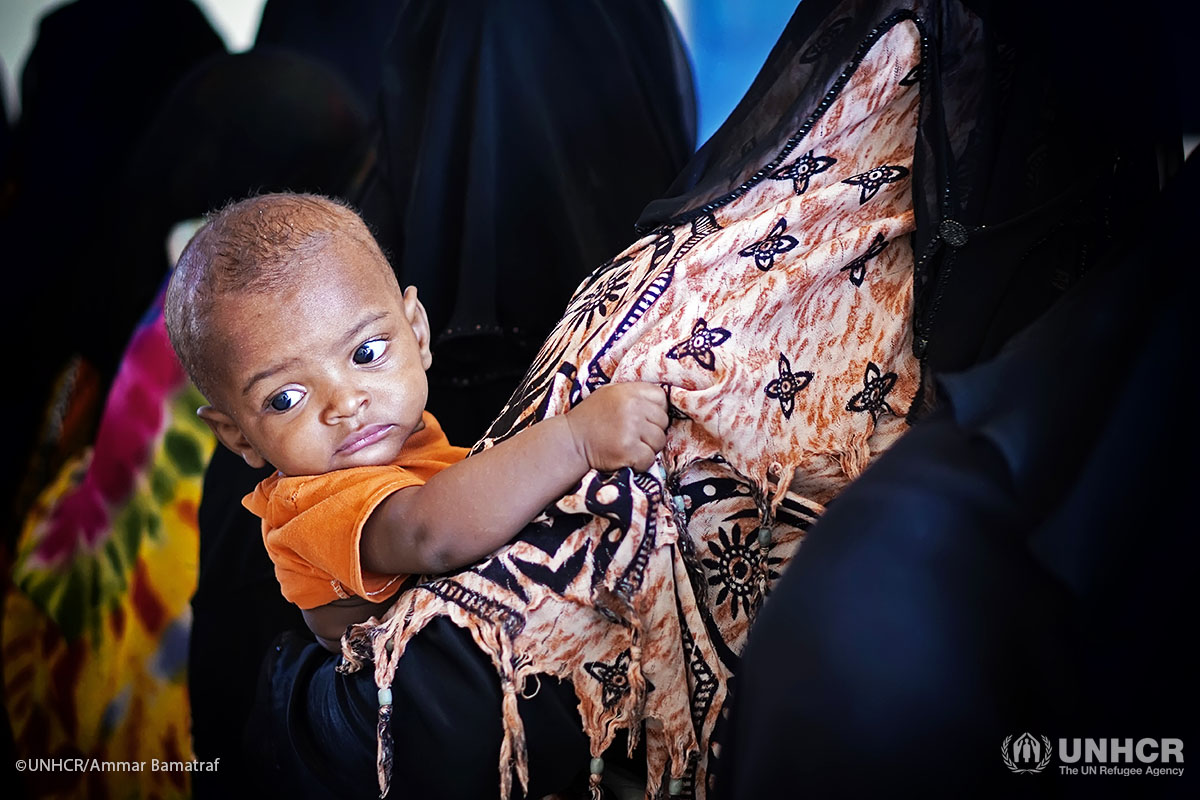 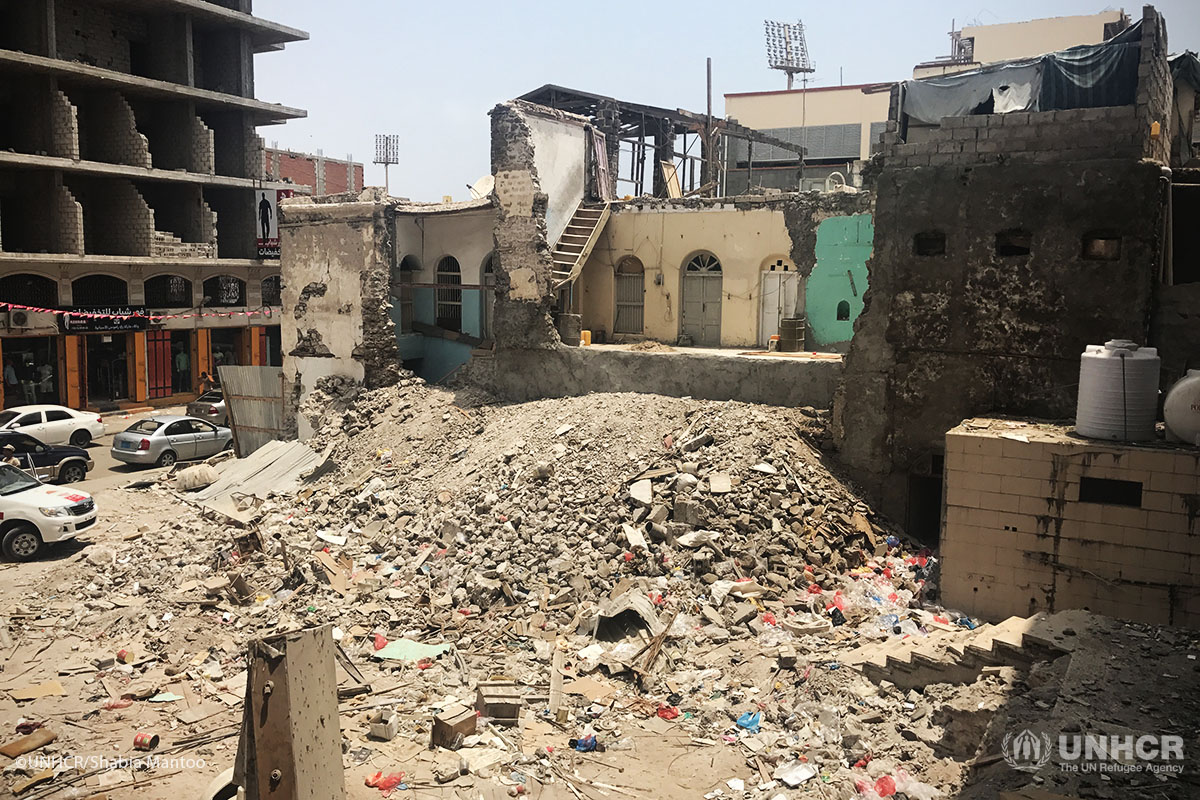 The UN has described the situation in Yemen as the world’s worst ongoing humanitarian disaster. Anyone who follows the news will know the headlines: civilians killed and injured, homes destroyed and children going hungry. But the grinding struggle of daily life in a war-torn country is harder to convey.

There are so many layers to the suffering here, made worse by massive displacement. An estimated 4.3 million people have been forced from their homes over the past four years, with more than 3.3 million still displaced and struggling to survive. Food is available but most ordinary Yemenis simply cannot afford it any more. Families have told me how malnourishment means that mothers are not producing enough milk to feed their babies, yet cannot afford formula to replace it.

The economy is on the verge of collapse. Cumulative losses in real GDP are estimated at $49.9 billion over the past three years. But the economy is just part of the story. More than a quarter of all children are out of school. Since late 2016, more than 1.3 million suspected cholera cases and nearly 2,800 associated deaths have been reported in 306 districts across Yemen — the worst single outbreak of modern times. 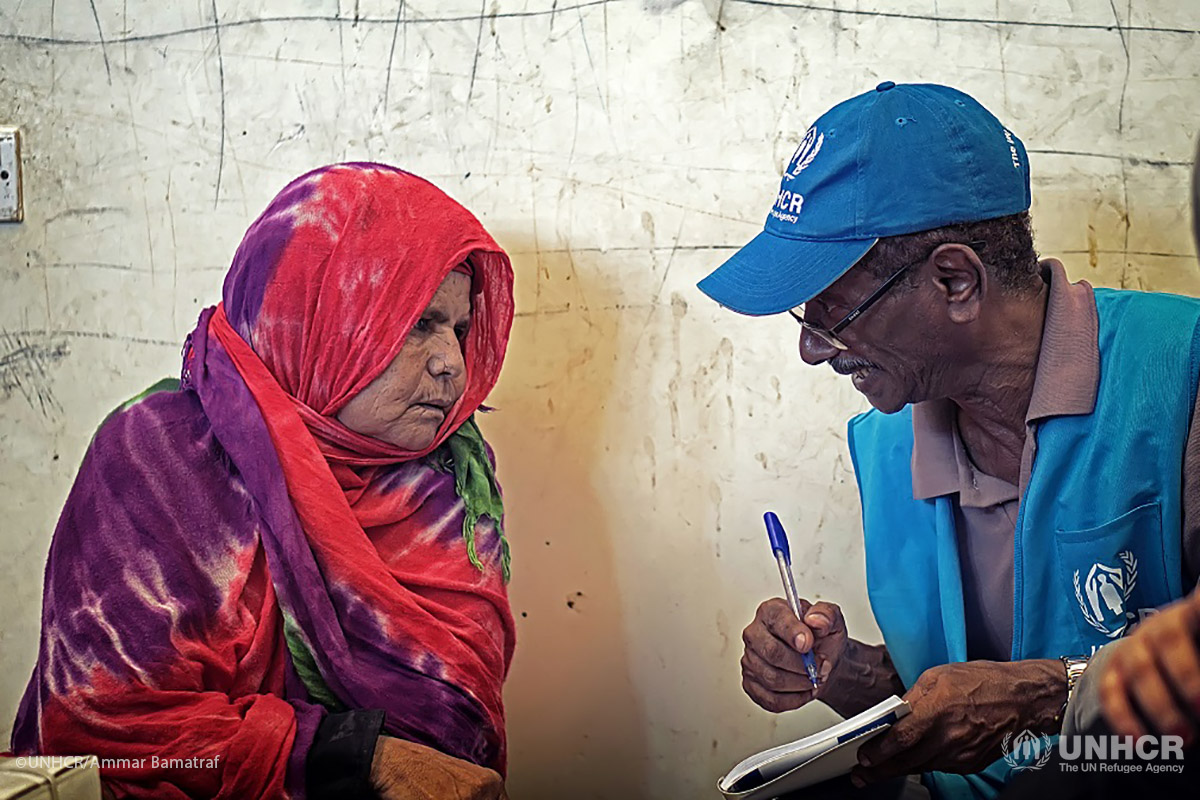 Added to this are the mental and psychological injuries that photos and news reports cannot show. Men, women, boys and girls suffer from anxiety, depression and other mental health disorders. Fathers can no longer provide for their children. In a society where men have traditionally been the main breadwinners, this loss of status is having a serious impact, including an increase in cases of domestic violence.

Psychosocial counselling is provided at UNHCR-supported community centres and their mobile outreach teams, but there is a serious shortage of psychiatric specialists and working health facilities, leaving many patients without the required medication or follow-up. Less than 50 per cent of health facilities across the country are fully functional, and they face severe shortages of essential medicines.

The sense of desperation is pervasive. I have met people living in the open on rocky land, exposed to the elements and other dangers — with summer temperatures topping 104°F — but who have nowhere else to go. An increasing number of displaced families are living on what we call “spontaneous sites”, with no fixed shelters and no access to potable water or sanitation facilities. I have seen makeshift shelters in Lebanon and Iraq but nothing like this — there are barely any materials to construct anything sturdy. Rickety shelters are thrown up using whatever there is: scraps of material, cardboard boxes, branches, plastic bags. 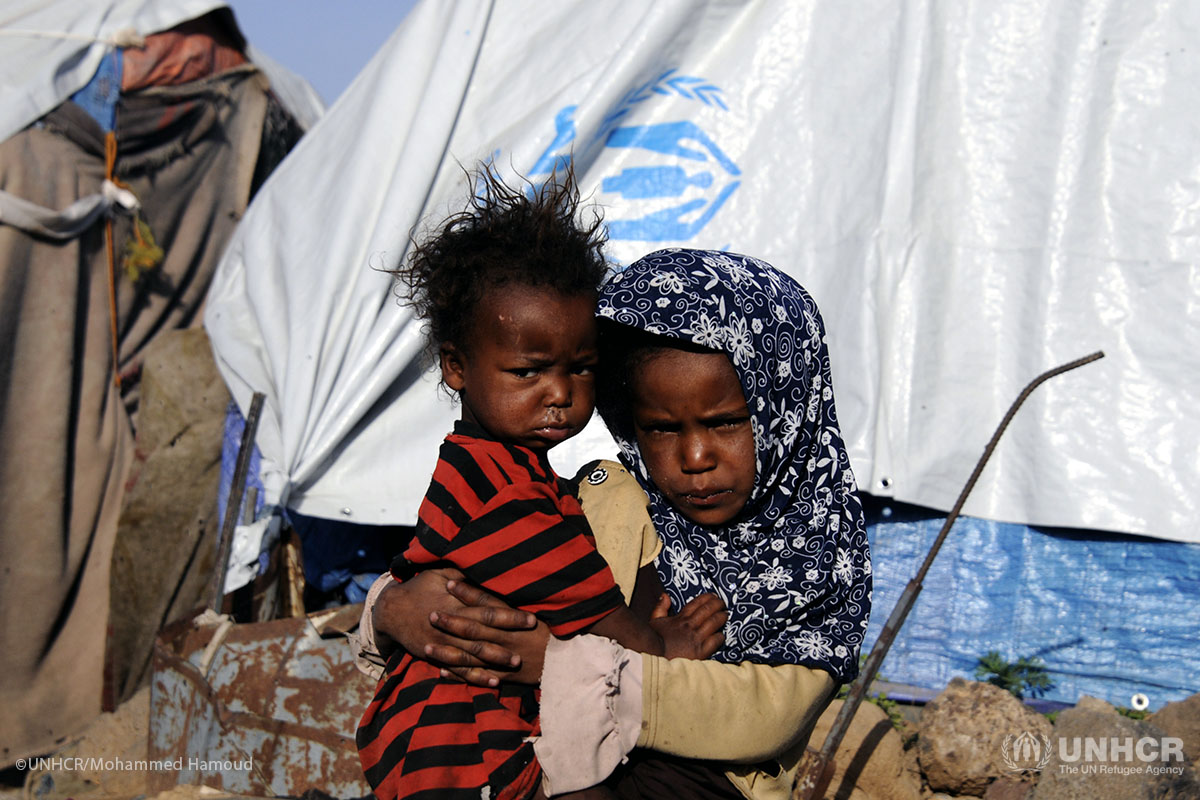 Last week I met Salah, a shy, softly spoken teenage boy from Taiz, a city in southwestern Yemen. I found him in one of the spontaneous sites where thousands now live, having fled the fighting in Taiz and the port city of Al Hudeydah. He fled his home a year ago with his grandmother and sister, leaving his elderly parents behind; they did not want to leave their home and livestock.

Salah lives in a makeshift structure he helped to build — a space too small for him to stand upright, but it’s the best he and his family could manage given the circumstances. ‘It’s my own space, sort of like my own room,’ he told me.

To stand alongside Salah’s shelter is to understand what it means to have nothing. His only possessions are the clothes he is wearing and the basic relief items UNHCR has distributed to families on this site. Almost everyone fled their homes with nothing, in many cases even without their shoes. People are completely reliant on aid.

“The war has obliterated the economy and destroyed livelihoods and lives.”

Like many of the stories I have listened to in Yemen, Salah’s tale is not an easy one to hear or retell. A year and a half ago, he and his best friend Kareema were out herding sheep with another friend in a valley near their home in Taiz. Kareema came across an object and, like any children might have been, she was curious and picked it up. “We didn’t know what it was but we thought we could play with it,” Salah told me. “A minute or so after she picked it up, it exploded.”

Kareema was killed on the spot; Salah lost his left leg and hand. “When I woke up, I was in hospital,” he mumbled to me. “My intestines were hanging out. I had several operations… when I realized I had lost my leg and hand I was devastated.” His other friend was similarly gravely injured.

The war in Yemen has robbed children like Salah of their childhood. As we parted, I was consumed by feelings of devastation and rage, aware that life is unlikely to get any better for him and thousands of his fellow Yemenis any time soon, given the sheer scale of this crisis. The UN estimates that 24 million people in Yemen now need some form of humanitarian or protection assistance — that’s 80 per cent of the population. The humanitarian community working to help them needs an estimated US $4.2 billion to provide life-saving aid to the most vulnerable in 2019.

“24 million people in Yemen now need some form of humanitarian or protection assistance.”

The war has obliterated the economy and destroyed livelihoods and lives. With food costs rising and job opportunities scarce, people are increasingly unable to meet their basic needs. Poverty rates have dramatically increased, with an estimated 81 per cent of Yemenis now below the poverty line — an increase of one-third since 2014. More and more displaced families living in rented accommodation are facing the threat of eviction as their debts mount.

Across the country, our teams are assessing people’s greatest needs. What we have found is that an increasing number are resorting to negative coping strategies such as begging, sending children to carry out the worst forms of labour, and forcing them into child marriage. Particularly when it comes to girls, this is seen as one of the few options families have to ease the economic hardship.

UNHCR is here on the ground, working to reach the most vulnerable people. Our teams are providing assistance and protection across the country — emergency and transitional shelters, and cash assistance to vulnerable families to help them survive. A core part of our response is providing protection support to people in need; this means social counselling, psychosocial support, legal assistance and more. In 2018, UNHCR provided this support to 105,000 people.

But the scale of this crisis is beyond anything I have ever seen. We will keep working to try to help the most vulnerable, yet as this conflict continues, the reality is we cannot reach everyone.

Monthly giving is the best way to ensure UNHCR has the tools to provide immediate protection and long-term support. Please become a monthly donor today and deliver lifesaving support immediately when a crisis occurs and for as long as vulnerable people need help.

The UN Refugee Agency works in 138 countries helping men, women and children driven from their homes by war and persecution. This profile is part of a series highlighting staff and their work.